According to Slate, three out of four Americans consider our political parties to be corrupt. This is based on a report by Transparency International. Indeed, the parties appear to be more corrupt by this metric than any other governing institution. Are they? 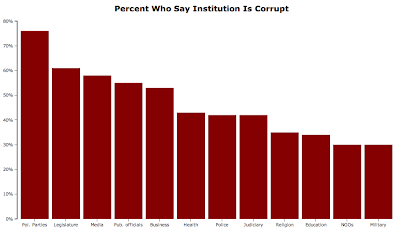 As Andrew Scott Waugh (via Facebook) notes, this claim rests on two very controversial definitions: parties and corruption. Arguably, this blog has spent over a year struggling with the definition of a political party. (See here and here for examples.) This is an unsettled topic among political scientists, and it is not at all clear what the respondents in the survey are thinking when asked about parties. Quite possibly, they are thinking about the party in government (folks like Obama, Reid, and Pelosi for the Democrats, and maybe Boehner or Romney for the Republicans), but they could also be thinking about people like Rush Limbaugh and Rachel Maddow, or they could be thinking about their annoying Republican/Democratic aunt/uncle they argued with last Thanksgiving. They’re probably not thinking about the respective chairs of the DNC and the RNC (can you name them?), but who knows?

But if parties are a murky concept, corruption has to be even murkier. Traditional definitions of corruption usually focus on dishonest actions performed for personal (usually financial) gains. Is that what Americans mean when they say that parties are corrupt? Do they think that Senate Republicans have been filibustering presidential nominees for financial rewards? Are Democrats pushing handgun regulations because they’re on the take? Do they think that the parties are being dishonest about their disagreements?

I would suggest that the label “corrupt” does not mean here what it’s usually taken to mean. Rather, respondents are simply saying that they don’t like parties. This isn’t new, and it isn’t unique to the U.S. (Slate notes that parties were rated the most corrupt institution in two-fifths of the countries included in the study.) Parties are typically — fairly or unfairly — seen as the source of divisions in our society rather than the articulation of them, and there is no shortage of journalists and politicians who suggest that without parties, we’d be able to govern our nation effectively and get along with each other. All this means is that if you work for a party, you should expect to be reviled, but you’re not likely to face corruption charges for it.