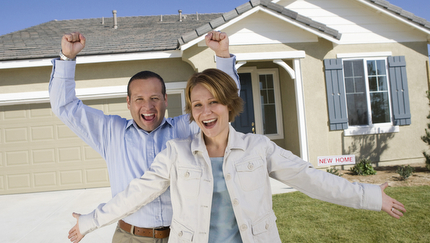 The face of evil.

In the United States, homeownership is taken as a bedrock, unquestionably positive thing, part of the American Dream. There is perhaps nothing more valorized in our society, save maybe serving in the military. The traditional deal that I heard over and over again growing up was that if you bought a house and made all your payments over the lifetime of the usual 30-year mortgage, you could get all your money back at the end, and perhaps even make a profit. “Homes for the long term;” straight out of home ec class and a bazillion pre-crisis financial advice columns.

But despite America’s worship of the free market, this situation is in no way a market outcome—it’s an outcome of the hydraulic forces of longstanding sociopolitical arrangements. You see, there is no reason to expect a profit from simply owning a house. A house doesn’t “grow.” It doesn’t increase in productivity to provide more housing services. It just slowly falls apart.

Therefore, the political system has constructed a colossal network of subsidies, both explicit and implicit, both private and public, to make sure there is always someone next in line to pay somewhat more for housing in real terms than the one before him. In part, this can be achieved by Yglesian supply constraints, but it’s also a story of supercharged demand, in the form of convincing people to take on immense amounts of debt for what is on its face an incredibly risky purchase. There is the government-backed 30-year fixed-rate mortgage, which doesn’t exist in countries without a government guarantee (because it’s too risky). There’s FHA and FHFA.

Then there is the mortgage-backed security market, which increases capital available for mortgage lending by selling them off in piles to investors. That market is state-subsidized by Fannie and Freddie actually creating the things (or insuring them through Ginnie Mae), and privately subsidized through mispriced risk driven by the information-hiding effect of the financial sausage machine. All validated, of course, by rubber-stamp AAA ratings.

If an average (i.e., not wealthy) person borrowed several hundred thousand dollars to speculate on the 30-years-hence price of a single, highly-illiquid asset that wasn’t a house, we’d call them insane. But because of the massive subsidy system, doing that for a house has, historically, been a pretty good bet.

But that’s just another way of saying the entire housing market is in large part a Ponzi scheme, requiring an endless supply of new buyers and increasing prices to stay afloat. This became more apparent in 2006 when the whole thing went sour and the housing market collapsed like a flan in a cupboard, eventually taking the economy with it. Residential investment has been at unprecedented lows since well before the actual recession: 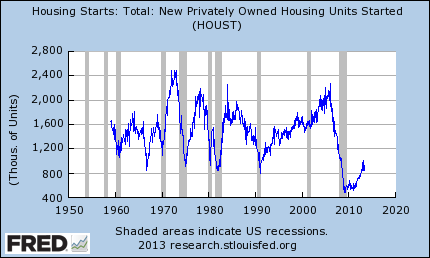 …I just don’t buy the basic assumption (common on both left and right) that homeownership is something to be unquestioningly supported. Don’t get me wrong, all things equal it would be great to get housing up off its back. A lot of homeowners did nothing wrong individually and were viciously punished for it, while big banks that had whole divisions dedicated to explicit mortgage fraud got stupendous piles of free cash (not to mention slapped on the wrist for even more mind-blowing criminality). Simple fairness and decency demands some help for homeowners, and getting a few million construction jobs would be great for average people.

But I’ve been convinced that the housing market crash, and the subsequent catastrophic recession, wasn’t some freak event, nor the sole result of lots of cooking the books from the banks. Systemic fraud was a key part of the equation to be sure, but these tectonic-level subsidy structures (Fannie & Freddie combined have about $4.2 trillion in assets) were even more important. I think we’re looking at the fundamental contradictions of a plutocracy which has a faulty mechanism for providing the social stability of the enfranchised bourgeois. So if we just return to the pre-crisis status quo ante, I see no reason why we wouldn’t just inflate another bubble in relatively short order.

(As an aside, today it’s largely virtuous homeowners who are valorized and subsidized to their back teeth while dirty irresponsible renters provide the necessary despised class to be frowned upon, but it’s worth remembering that federal housing policy used to be about explicit racist oppression.)

Anyway, I don’t have much hope that anyone will even consider fundamental changes to this system. These are the bones of our country we’re talking about. We might provide explicit price supports like we do with the farm bill, which would at least be more transparent, but the cognitive dissonance would be too much for our “free market” social pretensions. So if I had to guess, I’d say the political system is going to root around until we find a new fraud under which the subsidy can be buried, and we can get our stream of new buyers back up and running, followed by another crash sooner or later. It might be happening already.

I’d just like to make some space for thinking that isn’t wholly constrained by the boundaries of the political consensus. Too many analysts (not DeLong here, mind, I’m just riffing off his post) take the underlying system for granted, and propose minor tinkering in whatever direction confirms their priors (insert tax credit for favored group du jour here). But from my chair I see no reason homeownership should be valorized over renting. I think using the financial system to shower subsidies and status upon the enfranchised homeowning bourgeois has come to bite everyone in the ass. And I think that a better world is possible.

Note: a big thanks to Steve Randy Waldman, who helped me understand practically all of the above.