President Obama is in a heated confrontation with the Republican Party in the House. As we enter week two of the government shutdown, the media continues to make two comparisons:

However, one thing that the media has not done is to compare the ideological composition of the current (113th) Congress to the 104th, especially on the Republican side of the aisle.

We can easily do this comparison using NOMINATE data from voteview.org, which is a calculation of liberal-conservative ideological placement of members. Given that the 113th Congress is still in session, I compare the 104th, 112th, and 113th congresses to see how the ideological composition of the two party caucuses – but especially the Republican Caucus – has changed over time. Although there are some questions about how well NOMINATE scores can be used to evaluate change in ideology over time – after all, members are voting on different issues in different congresses and responding to different political pressures – the data provide our best insight into how the Congress, especially the Republican Caucus, has changed over time.

We can use these data to answer a couple of simple questions:

The way NOMINATE data work, the larger the number, the more conservative a member is. The Table here presents NOMINATE data for the Republican Caucus from the 104th, 112th, and 113th congresses.

Look at the red boxes. The ideological positions of half of the Republican members of the 104th Congress would now be positions held by the most liberal 10% of their caucus in either the 112th and 113th congresses.

Looking at the blue boxes, we see that the ideological positions of 90% of the Republican Caucus in the 104th Congress would be positions held by the most liberal 40% of the caucus today. Even from the last Congress to this congress we see a shift of ideology in the conservative direction. The ideological positions of the member who was in the middle of the caucus in the 112thcongress would now put that same member 10 percentage points more liberal in the Republican Caucus today. The green boxes show similar shifts between the 112th and 113th congresses.

Question 1a: Is this the same Republican Caucus that President Obama negotiated with in 2011?
Answer: No.

The shift in the conservatism of the Republican Caucus is clear. More and more members are moving rightward to avoid the threat of primary election challenges from more conservative members. A position that would have held water with half of the Caucus in 2011 would now have the ideological support of only 40% of the Caucus today (see the blue boxes in the Table).

Question 2: Is there a rump of back bench extremists in the House Caucus?
Answer: Not Really.

In the figure below, we can compare the distribution of members across the spectrum of NOMINATE ideology values. I have taken the minimum and maximum values from the three congresses – roughly 0 to 1.3 – and noted the percentage of members falling within each 0.1 space on this continum. If there the Caucus was being dominated by a conservative rump of members who are outside the Caucus mainstream, we would expect to see a spike in the black bars (for the 113th Congress) at the right end of the figure.

Instead, what we see is the general shift in the overall conservatism of the Republican Caucus. There is not a spike of Tea Party Republicans on the conservative tail; the Caucus is just more conservative. Another point to make here is that there are three House Committee Chairmen – Jeb Hensarling (TX, Financial Services), Edward Royce (CA, Foreign Affairs), and Paul Ryan (WI, Budget) – and several subcommittee chairs are in the most conservative 20% of the Caucus. These conservative members are not just Tea Party conservatives elected in 2010 but also include long-time members like James Sensenbrenner (WI). 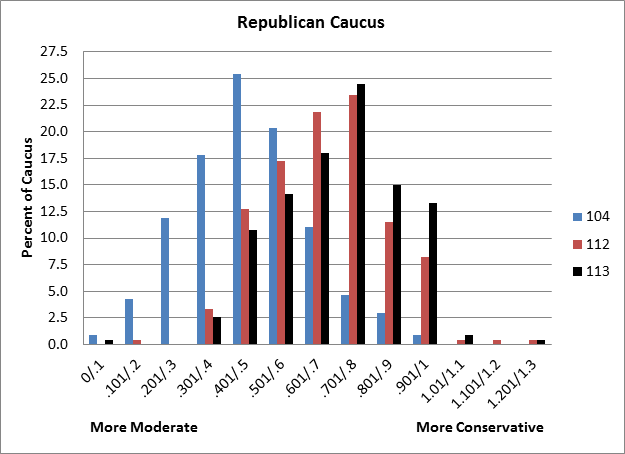 Question 3: But aren’t the Democrats polarizing too?
Answer: No. 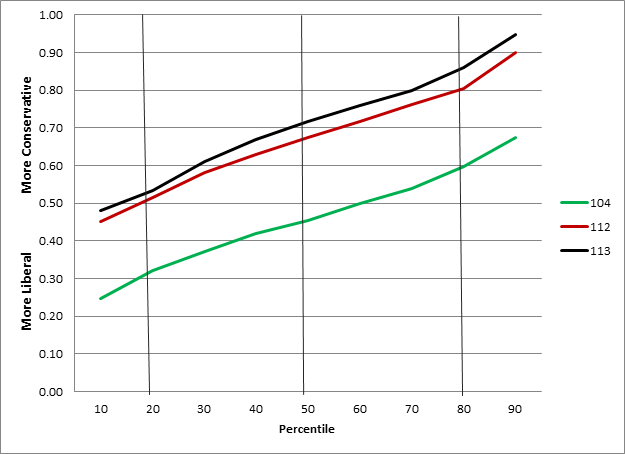 For the Democrats, we again have the party nominate values on the vertical axis and along the horizontal axis we have the percentile rank, from liberal to conservative. Nominate scores for liberals are generally negative values, so more conservative values appear going up the vertical axis and going to the right on the horizontal axis. When we look at the Democratic Caucus, we see two things. First, “most liberal” members (from 0 to the 20th percentile) of the Caucus did become more liberal from the 104th to 113th Congress. However, when we look at the median member of the Democratic Caucus, there has been relatively little change in ideology. The median Democratic Caucus member in the 104th Congress would be very close to the Caucus median today. (By contrast, the median Republican from the 104th Congress would be a very liberal member of the Republican Caucus today.) As we move toward the “most liberal members” (from the 80th to 100th percentile) of the Democratic Caucus, there has been almost no change in ideological placement over this time. 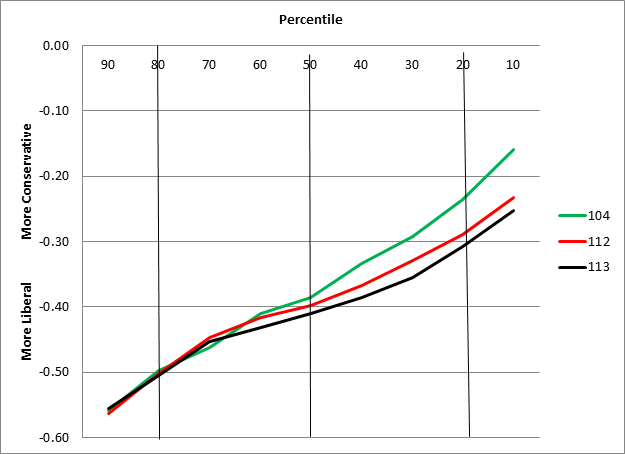 The bottom line here is simple: the Republican Caucus has become more conservative since just the last Congress. The movement in the average ideological positions of Republicans from the 112th and 113th congresses is statistically significant (t=-1.96). When President Barak Obama talks to Speaker of the House John Boehner now, he is not negotiating with the same Speaker from the 2011 debt crisis. The Speaker’s caucus today is more conservative than before and its members are even more concerned about the possibility of being “primaried” in 2014.

Thad Hall is an Associate Professor of Political Science at the University of Utah. He is the author of Evaluating Elections: A Handbook of Methods and Standards (Cambridge UP 2012).