There may be an interesting struggle between an incumbent lawmaker and her party coming up soon in Colorado. Anti-gun-control activists in the district of state Senator Evie Hudak (D-Arvada) are trying to assemble enough petition signatures to force a recall election against the incumbent. This is coming on the heels of two successful recalls of Democratic senators last month. The difference is that Democrats now only control the chamber by one seat. If this recall succeeds, that’s the end of united Democratic governance in Colorado, at least until 2015.

Now, Colorado is one of just five states in which vacancies in the state legislature are filled via partisan vacancy committees, consisting of local party officers in the departing member’s district. If the recall effort gathers enough signatures by December 3rd to force a recall election, Hudak will have a short window in which to decide whether to resign or fight to keep her seat. If she resigns, Democrats in her district get to pick a replacement, and the chamber stays Democratic. If she fights, she stands a significant chance of losing, turning chamber control over to the Republicans. Her district is almost perfectly split between Democratic and Republican voters; it’s actually more conservative than those of the senators who were recalled last month.

For now, Hudak says she won’t resign, but I can only imagine that the pressure from her party to step down will be crushing if the signatures succeed. At any rate, this will likely make for an interesting test of the powers of incumbents and parties.

Just to update the graph from my previous look at recalls, Hudak appears to be less representative of her district than either Morse or Giron (the previously recalled senators) were. She has slightly more liberal voting patterns than the others did, and she’s from a notably more moderate district. This will probably make a successful recall even more likely in her case, and will increase the pressure on her to bow out. 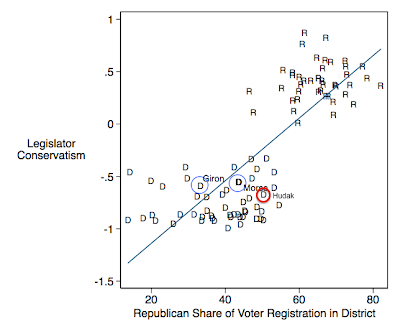