This post isn’t about solar per se. Instead, it’s about imagery and power. Check out thisphoto below the jump: 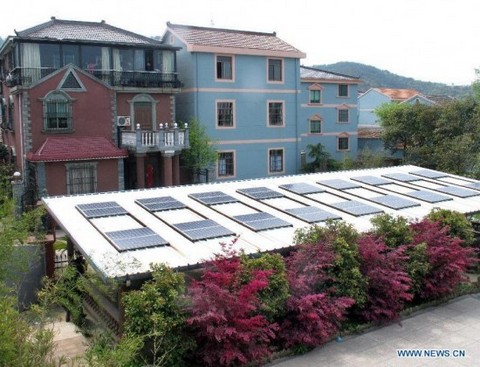 At first sight, the only surprising thing about this image from China is the standard of the middle-class houses.

Here’s the accompanying story, from the English website of Xinhua, published on 9 April:

The 27-year-old Mo, an enthusiastic fan of photovoltaic power generation, installed over 70 solar panels with the capacity of 7.5 kilowatt on the roof of his own house and garage in 2009. Yet these panel were left unused as they were not allowed to be incorporated into the State Grid. Things changed as the State Grid Corporation of China released a document on Feb. 27, 2013, encouraging distributed generation to be incorporated into the State Grid. Staff members of Ningbo Power Bureau came to Mo’s village for a survey of Mo’s homemade photovoltaic power generation equipments on Monday. Mo will have the first homemade photovoltaic power station in Ningbo if everything goes smooth in 35 workdays.

Just a cute human-interest story to fill the pages? Possibly; I don’t think so though.

Consider. China is a post-Marxist state, but it’s still Leninist, and structurally closer to North Korea than we would like, though much saner. An unelected, cooptative oligarchy of engineers rules 1.3 billion Chinese from the leadership compound in Beijing. The media are one of the velvet gloves concealing the iron fist. They are even more important than in Soviet Russia. The huge population of China makes a Stasi or a Gosplan impracticable, so the Party has to use slogans, campaigns and day-to-day messaging as instruments of control even more than the Soviet or East German Communist parties did.

The media say what they are told to say. Wikipedia:

The editors-in-chief of China’s major media outlets must attend the [Propaganda] department’s central office weekly to receive instructions on which stories should be emphasized, downplayed, or not reported at all.

This applies especially to the press agency Xinhua, which is straightforwardly part of the government:

Xinhua is subordinate to the State Council and reports to the Communist Party of China’s Propaganda and Public Information Departments. …. The agency was described as the “eyes and tongue” of the Party, observing what is important for the masses and passing on the information. A former Xinhua director, Zheng Tao, noted that the agency was a bridge between the Party, the government and the people, communicating both the demands of the people and the policies of the Party.

So what’s the not-so-hidden message of the April story?

China’s government repeatedly raises national targets for solar energy. The latest is 35GW by 2015, matching Germany today. The starting point is 8 GW installed at end 2012, so the required installation rate over the next three years is higher than Germany’s peak of 7.5Gw in 2011. Why the disruptive haste? The obvious answer is killer smog from coal burning, worst in the booming cities where future threats to the rÃ©gime may gestate. The Party needs to do something, and to be seen to be doing something, now.

Something interesting is happening within this target: a shift from utility to distributed. In October the sub-target for distributed solar for 2014 – next year – was raised to 8 Gw, over half the target of 14Gw, with 20Gw sketched in for 2015. Why? The distributed solar programme is being launched in the big cities, where it can have the biggest impact on air pollution. It’s also possible that Chinese difficulties in hooking up remote wind farms in places like Inner Mongolia to the grid are being replicated with solar farms.

Rooftop solar in cities faces its own obstacles: inexperienced installers and red tape. I read the Xinhua story as a message to the local officials who have blocked the connection of Mr. Mo’s DIY solar roof to the grid for three years: do it, now. It’s a hint with all the subtlety of a polite request to move your bike out of the road coming from the driver of a 60-ton main battle tank. The 35 days is just to save the officials’ face, and a hint to Mr. Mo not to crow too loudly.

Making this young man a hero is still extraordinary – and risky. Mo’s individualism would be out of place even in a German town, with its community wind farm promoted by the pastor and a Stammtisch in the best pub where the bosses of the Mittelstand companies gather on Fridays after work. In China, his type of nonconformity has been frowned on for 2,500 years. He’s behaving like the idealised American hero of reality and fiction: Dirty Harry, Curtis Gulin, Steve Jobs, and a host of other success stories. Encouraging this sort of behaviour creates great risks. Is Mo the type to stay behind the Great Firewall? Will he keep his tweets apolitical?

It gets worse: mass deployment of rooftop solar will turn millions of more ordinary householders into producers. If Germany is any guide they will start thinking of the electricity company as their customer, and become much more informed about energy policy. They will take their cues from the Mr Mos. Empowered citizens are dangerous.

The rulers of China are educated and intelligent men, if rather short on experience of the outside world. I’m sure Xinhua’s ultimate boss Liu Qibao has thought this through. It’s a measure of the depth of China’s air pollution crisis that the leadership are prepared to play with the sun like Icarus. 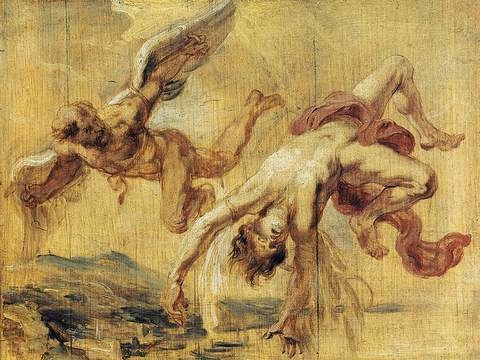 The Fall of Icarus, by Rubens. The Breughel is a more interesting painting, but his Icarus is deliberately reduced to a tiny, ignored figure in the background, and is more in less invisible in a screen image. I wanted the literally OTT drama of the story.