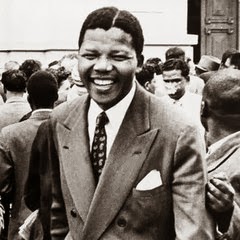 Zack Beauchamp and Igor Volsky have a nice piece looking at longstanding political opposition to Mandela and the ANC on the right, from William F. Buckley (who worked as a PR flack for the Apartheid regime) to the 2003, when NRO lambasted him for opposing the Iraq War. Base right-wingers hate him to this day: just check out the comments on this Facebook post from Jeff Duncan, a congressman from South Carolina. Or the ones on a similar post by Ted Cruz.

Buckley’s racket as an American paid propagandist for white supremacy would be repeated over the years in conservative circles. As Sam Kleiner demonstrates in Foreign Policy, apartheid would ultimately draw some of America’s most celebrated conservatives into its orbit. The roster includes Grover Norquist, Jack Abramoff, Jesse Helms, and Senator Jeff Flake. Jerry Falwell denounced Desmond Tutu as a “phony” and led a “reinvestment” campaign during the 1980s. At the late hour of 1993, Pat Robertson opined, “I know we don’t like apartheid, but the blacks in South Africa, in Soweto, don’t have it all that bad.”

I think it’s important to note that this goes deeper than just conservative activists, down to the core of the American state. As Peter Beinart notes, for almost its entire history the South African liberation movement was shoehorned into a Cold War framework by ignorant American elites.

And it wasn’t just talk, either. Back in 1962, the CIA ratted out Mandela to the Apartheid regime, leading to his 27-year imprisonment. Ronald Reagan labeled him and the entire ANC terrorists, a label which was only removed in 2008. Divestment legislation was passed over his veto. (War criminal Dick Cheney is still unrepentant about his vote against the override back when he was in Congress.)

It is to remember that sometimes the radicals are correct, that in the heat of the moment, movements for justice can be easily caricatured by those with authority as threats to public safety, and those seeking basic rights and dignity as monstrous villains. And then after the radicals win, we try to make them safe and useless to future radicals by pretending our beloved secular saints were never radical at all.