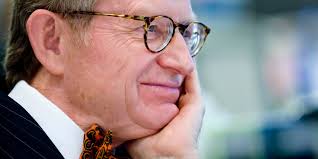 According to an article in the Charleston Gazette, Gee will serve as the interim president at West Virginia University starting in January. This is the same school where he also served as president, starting at the age of 37, from
from 1981 to 1985.

This will be the second time that he’s done this. He was also the president of Ohio State twice, once from 1990 to 1998, and then again until from 2007 until he left last year after the Associated Press revealed that Gee, a Mormon, had joked that Notre Dame wasn’t invited to be a member of the Big Ten because the university’s priests “are not good partners” and “you just can’t trust those damn Catholics on a Thursday or a Friday.”

No word yet on what he will be paid to serve as president of West Virginia University, a school that’s struggled financially in recent years.

At Ohio State he was paid almost $2 million a year, the highest salary of any college president in American. He also reportedly got $5.8 from Ohio State after he resigned.

He was, however, probably worth. He raised more than $1.6 billion for Ohio State during his time at the school.