On November 28 I welcomed the first million enrollees under ACA, whether to marketplace policies or Medicaid/SCHIP. The post was based on the fragmentary data available at the time, brought together in Charles “brainwrap” Gaba’s invaluable running spreadsheet, with some extra tweaks and guesswork by me.

HHS has just released its ACA enrolment report to 30 November. It even has a chart! Heavens to Betsy! Here’s the rare bird, after the jump: 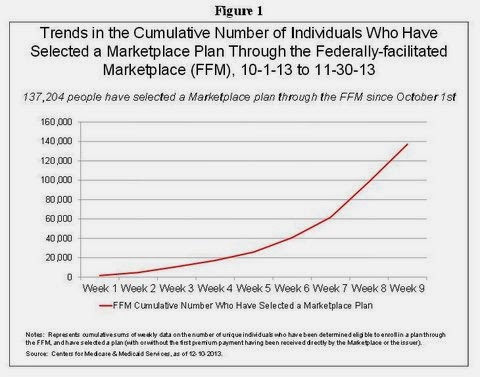 My point. But on the more detailed predictions, I didn’t do nearly so well.

Oops. Where did I go so wrong?

I made four adjustments to brainwrap’s data. The first three – taking out those transferred administratively from state low-income health plans to Medicaid, which HHS doesn’t count either; extrapolating the interim data from the state websites to the end of the month; and extrapolating healthgov Medicaid enrollments in the same way – were OK. They gave me an adjusted total of 1,167,000, as close to the outturn as only a fluke can be.

My mistake was grossly overestimating the number of signups to private policies on healthgov. My reasoning was that 673,000 people had eligibility determinations from healthgov on 2 November and had not yet chosen a policy. Surely they would chose one in November? Well, most of them haven’t. The total signups in November were only 110,000.

The number of such ditherers on healthgov has risen to an impressive 1,388,000, plus another 554,000 on state exchanges. On the latter, ditherers outnumber signups 2:1, with considerable variation between states; on healthgov, by 10:1.

On the well-functioning websites of California, Kentucky, New York and Washington, the dithering presumably reflects free choice. On healthgov, it’s very likely that the continuing problems with the shopping stage of the website, and with its communication with insurers, pushed up the number. If healthgov had the same ratio as the state sites, I’d have been 350,000 up, and less embarrassingly wrong.

By report, healthgov really took off in December, after the announcement that it was fixed. The leaked number for signups in the first three working days was 56,000 – half the total for all of November. It’s reasonable to think Healthgov will converge on the mean delay on the state sites, and that the latter will fall as deadlines near.

What of my third prediction?

No egg is visible in their mirrors of course. Those conservative critics with an open line to reality are reduced to whingeing: people aren’t really enrolled until they pay the first premium (that must come as a shock to many!), there’s a big hill to climb to meet the March goal, etc. (Cf. Sybil Fawlty, “special subject – the bleeding obvious”. )

No news from Perry or Scott. Perhaps they are glumly contemplating these numbers in the HHS report:

It’s only going to get worse for them. Jeffrey Zients has saved the Affordable Care Act and with it Barack Obama’s legacy. I Told You So.