Do cities with less poverty test better? Yes, but the correlation is not as tight as you might guess, according to 2013 test scores released Dec. 18, 2013. I put together a spreadsheet looking at the percentage of students who qualify for free and reduced priced lunch in each of the 21 urban school districts that volunteered to be part of a National Center for Education Statistics assessment (known as NAEP TUDA). I then compared these poverty rankings to each city’s standing in fourth grade math. My original data came from here and here.

Charlotte, NC with the smallest percentage of poverty on the list (only 56%) has the top math score — as you might expect. But it’s interesting that Jefferson County, KY, which has the 4th smallest percentage of poverty (65% low income students) ranked 11th in math. You would have expected it to post a higher math score. Similarly, Atlanta and Washington DC post lower math scores than their poverty rankings would suggest. Conversely, Boston has higher poverty than most of the other cities. Yet its fourth graders posted the 5th highest score in math.

Here is my table…. 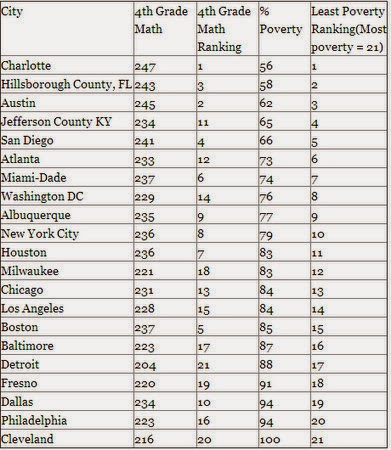