Some part of me cringes internally with the approach of Yuletide because it reminds me of an inexcusable social gaffe I committed on Christmas Day a few years ago. They say confession is good for the soul, so perhaps if I write out what happened my sense of deep embarassment will be relieved.

It all started here, in the smoking room of my club, normally a place of complete contentment for me. The smoking room has been non-smoking for some time and is thus comfortable for hosting many events, including the London club chess championship. Each club has a team of 6-8 players, and we round-robin compete each year to determine who is London’s best. 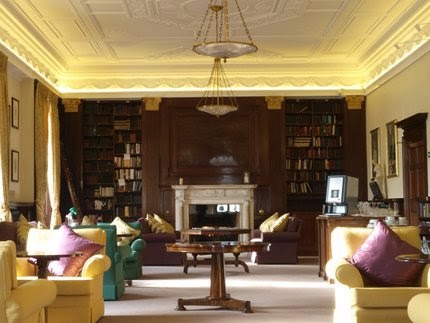 In 2010, the Oxford and Cambridge Club joined our chess league. Cockily, with little investigation, I challenged their co-captains to a Christmas Day afternoon match at our club. I assumed that Lucy and I would make short work of them, thereby getting a psychological advantage over their team going into the coming year’s tournament.

Little I did know that their co-captains were Professor Sir James Blandings, author of a celebrated analysis of the Steiner-Lilienthal matches of the 1930s, and Professor George Kerby, coach of 10-time British champion Malcolm Trevor, among many others.

While sipping tea and seemingly half-paying attention, these two chess wizards annihilated us. While telling stories about their favorite world championship matches, they pulverized us again. Lucy and I switched opponents after two quick games, but it didn’t help. To put it mildly, it was humiliating.

club foyerAs it was beyond debate that no number of re-matches would change the basic result of our contest, I thanked them for their time, said I would see them out, and walked them down to the club’s magnificent entryway. I think if they had just left promptly I would have been able to keep my composure after being so soundly thrashed. But I suppose because of their being OxBridge Dons, they couldn’t help but rub it in. 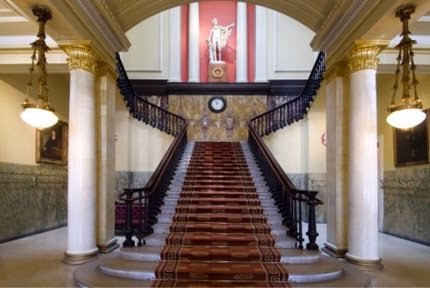 Blandings opined that defeating me was easy because I made mistakes very similar to those of Kasparov — before he was any good. Kerby offered that beating Lucy felt ungentlemanly to him, given his obviously superior talents. They mentioned that they expected the chess club season to be a joy because they knew they would roll over every team as easily as they had dispatched us.

Maybe it was my bruised ego or maybe it was the irritation of the icy winter breeze coming in as people left and entered the club while Blandings and Kerby stood bragging in the entryway, but in any event I did something truly unforgivable of which I remain ashamed today.

My face burning, I blurted out: “All right you won, you pompous blowhards, now shut your gobs and go home!”.

Blandings was not even mildly disconcerted by my outburst. He looked at me calmly and said “Really, Professor Humphreys, it’s Christmas. There is no reason for you to get so upset about

Ho Ho Ho! Did I get you on that one? Or did you notice that all the character names in my fictitious tale were from Cary Grant movies?