What will early childhood education look like in New York in coming years? New York City Mayor Bill de Blasio has proposed citywide universal pre-K, funded by a tax the state legislature would have to approve. Then, in his recent 2014 State of the State address, Governor Andrew Cuomo baffled political observers by proposing a plan even more ambitious than de Blasio’s—statewide full-day prekindergarten—while remaining silent on funding, even reaffirming his commitment to cutting, not raising, taxes. But in this political game of cat and mouse, another question needs to be asked: Will de Blasio and others advocate for a truly universal pre-K program? 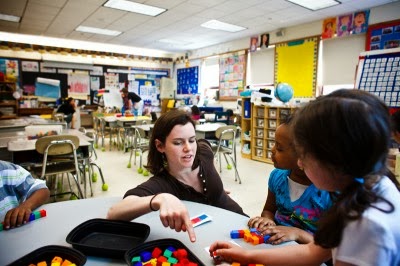 In his inaugural address, de Blasio restated his pitch for universal pre-K. “We will ask the very wealthy to pay a little more in taxes so that we can offer full-day universal pre-K . . . And when we say ‘a little more,’ we can rightly emphasize the ‘little.’” Hoping to assuage fears of Robin Hood-style banditry, he proposed wealthy people pay what he said amounts to “about the cost of a small soy latte at your local Starbucks.” Americans are used to hearing how much child welfare their spare change can buy, usually from charitable organizations. Why did a leading progressive populist make this latte appeal?

The only thing bolder than suggesting wealthy taxpayers fund early childhood education for the poor is suggesting they might send their kids, too.

De Blasio’s language minimized the increased tax burden for those earning $500,000 and above. But while strategic—is a millionaire really going to flee to Paramus over a cup of coffee?—de Blasio’s latte language has unfortunate spillover. It emphasizes the flow of money from the wealthy to the poor, entrenching the idea that early childhood services are a boost to the needy rather than a common good. He clarifies that the tax does not represent a move to “punish success” but is intended to “create more success stories.”

The reasons policy makers cast early childhood education as an anti-poverty intervention may be tactical rather than substantive. Movements toward state-sponsored childcare have long encountered resistance from conservatives opposed to government involvement in family life. In 1971, Nixon vetoed the Comprehensive Child Development Act, which would have established preschools operated on a sliding scale. As historian Nancy Cohen reminds us in the New Republic, Nixon argued, “for the Federal Government to plunge headlong financially into supporting child development would commit the vast moral authority of the National Government to the side of communal approaches to child-rearing over against the family-centered approach.” Head Start, the surviving federal program, was more palatable because conservatives perceived it as mere patchwork.

In a political context in which early childhood education has been billed as being opposed to traditional middle-class family values, advocates avoid framing it as a tool to promote, say, the participation of mothers in the workforce. Instead, they frame early childhood education as a boost to low-income children, nothing more, nothing less. When Obama advocates for pre-K for all, he references the “achievement gap.” When Hillary Clinton advocates for expanded early childhood services, she references the “word gap.” So even as preschool has become more common for affluent children, de Blasio casts even universal pre-K as a kind of poverty intervention.

Messaging matters: professionals with means who send their children to universal pre-K profess a kind of guilt, as if they’ve dipped their hand into the community chest unfairly. Laura Moser, writing in the New York Times Motherlode blog, disclaims, “I know that universal preschool wasn’t started for families like mine. D.C. instituted it for the same reasons President Obama proposed it: to close the so-called achievement gap, and to prepare low-income children to enter kindergarten on the same level as their higher-income counterparts.” She goes on to describe the benefits for her family: her son is learning more than he did in day care, and her family was able to afford a second child.

When I taught at a public pre-K in Bridgeport, CT, the energy of parents of all income-levels coming together to support their children was electrifying. When an affluent family from the suburbs grappled with a child’s illness, a family on public assistance brought them frozen lasagna to ease the burden. During morning drop-off, college-educated parents discussed summer enrichment options with parents who worked as seasonal day laborers. The mixed-income nature of our program was not just “warm and fuzzy:” When some well-off families began to opt-out of our school’s kindergarten, administrators had to cut the number of classes and increase class size.

There are reasons to think that, deeply entrenched as the welfare model is, the paradigm may be shifting. The cost of child-care is sufficiently high that many upper-income parents consider public options for their children: In New York and 18 other states, the cost of center-based care for a four-year old exceeds in-state tuition and fees at a four-year college. And for all his talk of lattes, de Blasio’s media campaign is beginning to emphasize the benefits of government-funded pre-K for all. His team has created a video that shows a vibrant, multi-racial classroom that reminds me of the classes I taught in Bridgeport—or how they would look with better facilities, smaller classes, and more funding.

Without a doubt, the next hurdle for de Blasio’s plan is Albany, where Gov. Cuomo has renewed his promise to cut taxes. In the longer term, however, the program will thrive if—and only if—it makes good on its promise to be universal. Learning conditions must inspire middle and upper-income families to keep their kids enrolled, and working conditions must inspire teachers to stay and teach. It’s important that de Blasio emphasize what wealthy voters might receive in exchange for their increased taxes—and then maybe folks will have their lattes, and their pre-K, too.

Amy Rothschild is an early childhood educator with experience teaching pre-K in public and independent schools. She is a Fellow at Teaching for Change.