President Barack Obama is really eager to promote vocational education for America’s high school graduates. It’s part of his plan to get more Americans through higher education and it’s also, arguably, a way of helping to improve the earning potential of America’s working class, who can no longer count on the high-paying manufacturing jobs that sustained the class in the last century.

But sometimes his promotion is a little awkward. Earlier in the month, when talking up vocational jobs, the president quipped that, “I promise you, folks can make a lot more potentially with skilled manufacturing or the trades than they might with an art history degree.”

Yeah, that didn’t go over well. While the president, who has a bachelor’s degree in political science from Columbia, backpedaled a bit later—saying “Nothing wrong with art history degree…I love art history. I don’t want to get a bunch of emails from everybody”—it didn’t really work. He got a lot of angry emails. 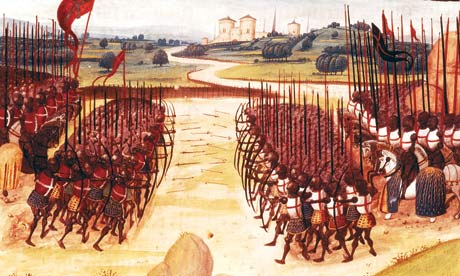 And so he apologized sort-of, sending a hand written-note to University of Texas art historian Ann Collins Johns explaining that he “was making a point about the jobs market, not the value of art history.”

But because this is politics the issue apparently still wasn’t over.

Because then Florida Sen. Marco Rubio (who has a bachelor’s degree in political science from the University of Florida) decided he needed to weigh in as well, tweeting that he thought he thought the president’s note to Johns was “pathetic.” Rubio insisted that “We do need more degrees that lead to #jobs.”

The fact that we need more training for people to get jobs was exactly the point Obama was emphasizing, both in the original speech and in his letter to Johns.

I’ve pointed out before that actually people who major in the liberal arts do just fine in terms of career prospects, but even if Marco Rubio and the president were on to something, dear God who cares?

Politicians, how much time and effort are we spending on this little fight? Isn’t there a national health care plan you need to fix? [Image via]