Global approval of American leadership spiked immediately after President Obama replaced President Bush and then began a slow and steady drop throughout the remainder of Obama’s first term. However, the new Gallup numbers are in for 2013, and they show that the downward trajectory reversed itself in 2013. 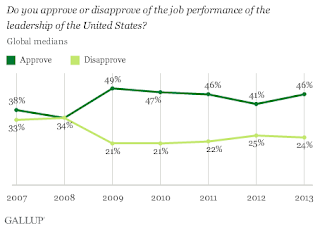 It’s not easy to understand the improvement, as last year was a difficult one for the United States, with the Syrian situation causing a lot of angst and the Snowden revelations damaging foreign relations with countries from Russia to Germany to Brazil.

One thing that did change was our Secretary of State, and maybe John Kerry is doing an exceptional job. But I kind of doubt he’s more popular on the world stage than Hillary Clinton.

What else could explain the improvement?

Also, the chart is pretty clear evidence that the Obama administration has done a decent job of improving America’s image abroad, which is something that the right simply doesn’t want to acknowledge.