Despite the fact that he won’t tell anyone whether or not he even owns a gun, the National Rifle Association has just endorsed Senate Minority Leader Mitch McConnell in his primary against Matt Bevin. The Gun Owners of America endorsed Bevin. Meanwhile, McConnell’s likely Democratic opponent, Alison Lundergan Grimes, decided the whole things was worthy of a little taunting.

I invited @Team_Mitch to join me at the gun range 155 days ago. The invitation still stands, Senator: http://t.co/iTpPzJsf5r #kysen 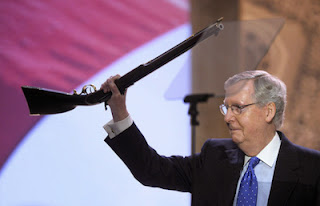 McConnell wouldn’t answer questions after the NRA event, either.

The Republican lawmaker refused to answer a question related to the Second Amendment.

He was asked about a suggestion from Attorney General Eric Holder about tracking gun owners with bracelets tied to guns.

“What I came here to talk about, in addition to what I just talked about, is what I just had to say in there. Anyone interested in following up on the statement I just made, well OK, thanks a lot,” said McConnell.

That last comment by McConnell is worthy of Veep.