Right away, Alec appears to be the most successful in his professional life. Just four months out of college, Alec, the former president of the Georgetown Democrats, is now an aid to a Democratic member of the House of Representatives. He’s remarkably cocky about his success, throwing around his boss’ name in a hospital emergency room in an attempt to dissuade police from arresting his saxophone-playing alcoholic friend Billy (Rob Lowe) for drunk driving. Alec later gets Billy a series of political jobs. What’s more, Alec is apparently making enough money for he and his live-in girlfriend Leslie (Ally Sheedy) — who has no apparent income but expensive tastes in home decor — to afford an enormous loft together and to be considering marriage and kids.

And then, in perhaps his most brazen move, Alec announces that he is quitting his job working for a Democratic House member to go work for a Republican Senator. Yes, he switched chambers and parties.

Needless to say, this is an extremely unlikely occurrence. And, to the film’s credit, it is taken seriously as an important event; Alec’s party switching is mentioned at least four times, by my count. But could this have happened back in the 1980s, when parties were notably weaker than they were today?

I checked in with the finest congressional scholars who would return my texts over a holiday weekend (Jen and Greg), who confirmed to me that such a professional career move would have been unlikely, but not impossible, back in 1985. Why would it have been unlikely? Well, this simply isn’t how career networks function on Capitol Hill. Unless his boss gets elected to the Senate, a House staffer tends to stay a House staffer because the allies he makes tend to be in the House. And party switching is rare because everything about the Capitol is organized in a partisan fashion. A Republican senator presumably has hundreds of active Republicans he could hire before he’d choose a Democrat. Defectors are not much appreciated by either side. This would be a risky career move.

Yet Alec’s switch would not have been impossible back then. After all, the parties were far less ideologically distant from each other than they are today. If we assume that Alec had some ideal point slightly to the left of center but would have been comfortable working for members of Congress (MCs) several points to his left or right, there probably would have been several Republican MCs within his comfort zone. This would not have been true in the modern House, as the diagram below shows. 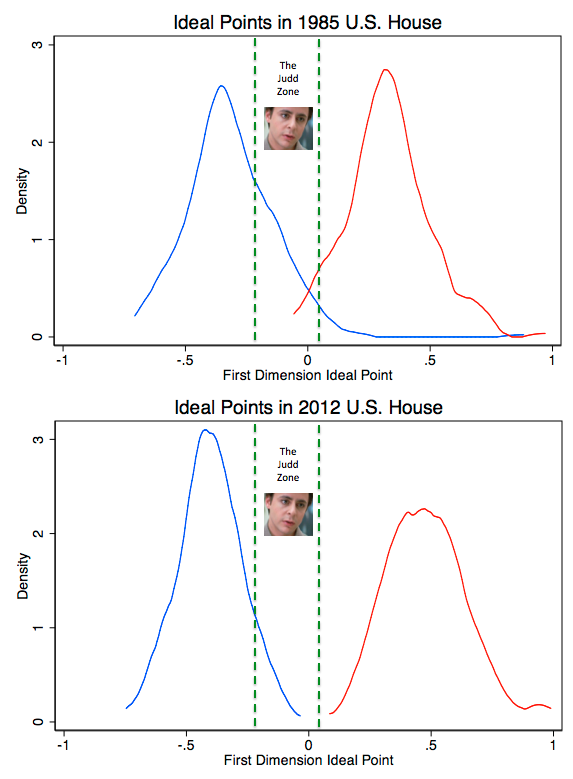 It’s also possible Alec was a Southern Democrat and was already pretty conservative, making his eventual party jump easier. After all, several prominent Southern Democratic politicians, such as Phil Gramm and Richard Shelby, switched to the Republican Party in this era, and presumably some of their staffers did, too. Still, we don’t get any hint of Southern background in Alec’s diction, clothing, or taste in music (Springsteen, Billy Joel, the Pretenders).

It’s also worth keeping in mind that in 1985, the House was under Democratic control, while the Senate was led by Republicans. So this might have seemed like an expedient career move for Alec, gaining more income and power while staying in the majority party. He probably would have suffered for it down the road, though; Republicans lost Senate control in 1986 and didn’t win it back until 1994. Alec probably would not have been particularly welcome back in Democratic circles after his jump (or after he drunkenly punched out his best friend, confessed his infidelity to his girlfriend, and kicked her out of their apartment in front of all their friends during a holiday party), although he would have been well positioned for the 1994 GOP takeover if he were still working on the Hill at that point.

The point of this post is not to critique “St. Elmo’s Fire” for being unrealistic; that ship has sailed. After all, it also features frustrated amateur philosopher Andrew McCarthy publishing an article in the Washington Post entitled “The Meaning of Life,” and Demi Moore trying to commit suicide by sitting in an apartment with the windows open on a moderately cold day. It’s simply to note the context for the most political event in the film and to reflect on the fact that a career move that would be suicidal today might only be seen as risky 30 years ago.