From the beginning, President Obama articulated an “all of the above” energy plan – something that angered both environmentalists and the fossil fuel industry. But it was a systemic approach that took into account not only the issue of climate change, but also this country’s economic recovery and a foreign policy that was too often influenced by our dependence on foreign oil.

Michael Grunwald was the first to see the seeds of major change on climate policy that were included in President Obama’s 2009 stimulus plan (the American Recovery Act).

…the battle over the Recovery Act’s short-term rescue has obscured its more enduring mission: a long-term push to change the country. It was about jobs, sure, but also about fighting oil addiction and global warming, transforming health care and education, and building a competitive 21st century economy. Some Republicans have called it an under-the-radar scramble to advance Obama’s agenda — and they’ve got a point.

For starters, the Recovery Act is the most ambitious energy legislation in history, converting the Energy Department into the world’s largest venture-capital fund. It’s pouring $90 billion into clean energy, including unprecedented investments in a smart grid; energy efficiency; electric cars; renewable power from the sun, wind and earth; cleaner coal; advanced biofuels; and factories to manufacture green stuff in the U.S. The act will also triple the number of smart electric meters in our homes, quadruple the number of hybrids in the federal auto fleet and finance far-out energy research through a new government incubator modeled after the Pentagon agency that fathered the Internet.

The only stimulus energy program that’s gotten much attention so far — chiefly because it got off to a slow start — is a $5 billion effort to weatherize homes. But the Recovery Act’s line items represent the first steps to a low-carbon economy. “It will leverage a very different energy future,” says Kristin Mayes, the Republican chair of Arizona’s utility commission. “It really moves us toward a tipping point.”

The goal was for the government to ignite investments in clean energy that were seen as too risky for the private sector. And as President Obama said to NPR’s Steve Inskeep a few weeks ago, “a lot of the work that we’ve done is beginning to bear fruit.” Jonathan Chait summarized some of that in his article about this President’s legacy:

Thanks to public investment in the U.S. and abroad, solar energy has undergone revolutionary growth. Capacity has increased 130-fold since Obama took office, while the price of installing a system has fallen by more than half.

But as he goes on to suggest in that article, this is about more than simply an investment in U.S. energy use.

He [President Obama] reached a major climate agreement with China, which presages the first-ever international agreement by industrialized and developing countries alike to curtail their emissions (an agreement made easier by the revolutionary improvements in green energy, which could allow developing economies to leapfrog straight past the dirty energy stage). The success of this agreement will take decades to measure, but it could well go down in history as Obama’s most significant legacy.

To highlight the importance of that bolded statement, here is a graph of the world’s top fossil fuel emitters. 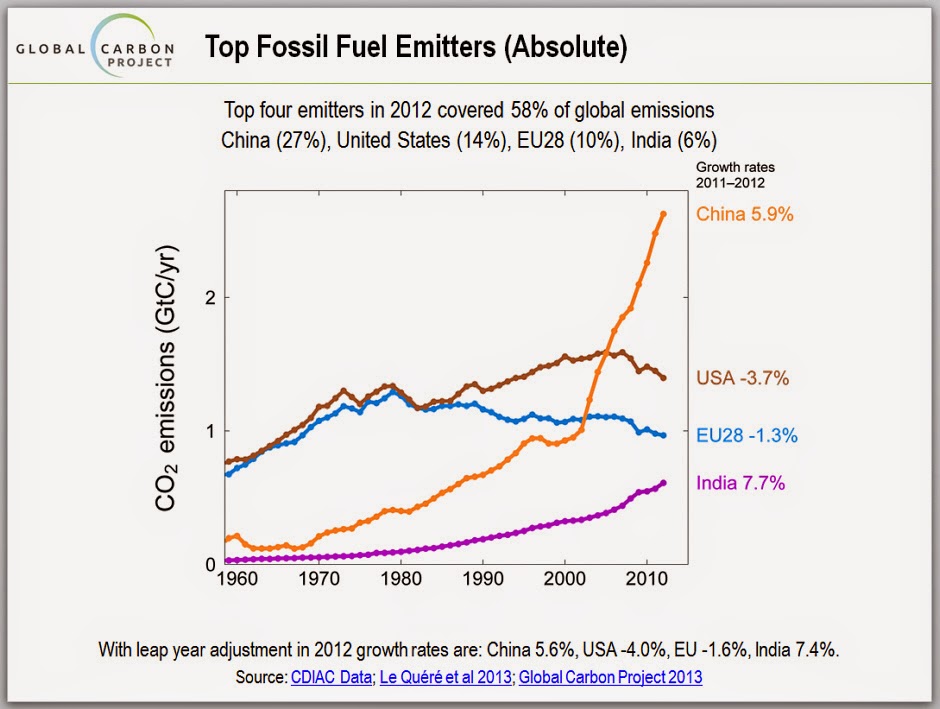 Not only has President Obama secured a major climate agreement with China, there might be another announcement in a couple of weeks.

There could be progress on US-India civil nuclear cooperation, solar power and climate change when US President Barack Obama visits India in two weeks, US officials said on Sunday.

All of this added to the Obama administration’s rules on coal plant and methane emissions mean that the United States goes into the Global Climate Change Conference in Paris later this year with a very strong hand.

These are the kinds of changes that are possible when you take a systemic view of global challenges and are willing to play the long game.