In a bizarre article for the New York Times, Peter Wehner argues, “In the last two decades the Democratic Party has moved substantially further to the left than the Republican Party has shifted to the right.” I call this argument bizarre because, by the best measures we have, it’s completely wrong. As in the opposite of correct. Just for an example, note patterns in Congressional roll call voting charted by Keith Poole et al. at Voteview.com, based on every roll call vote cast in Congress since the 1870s: 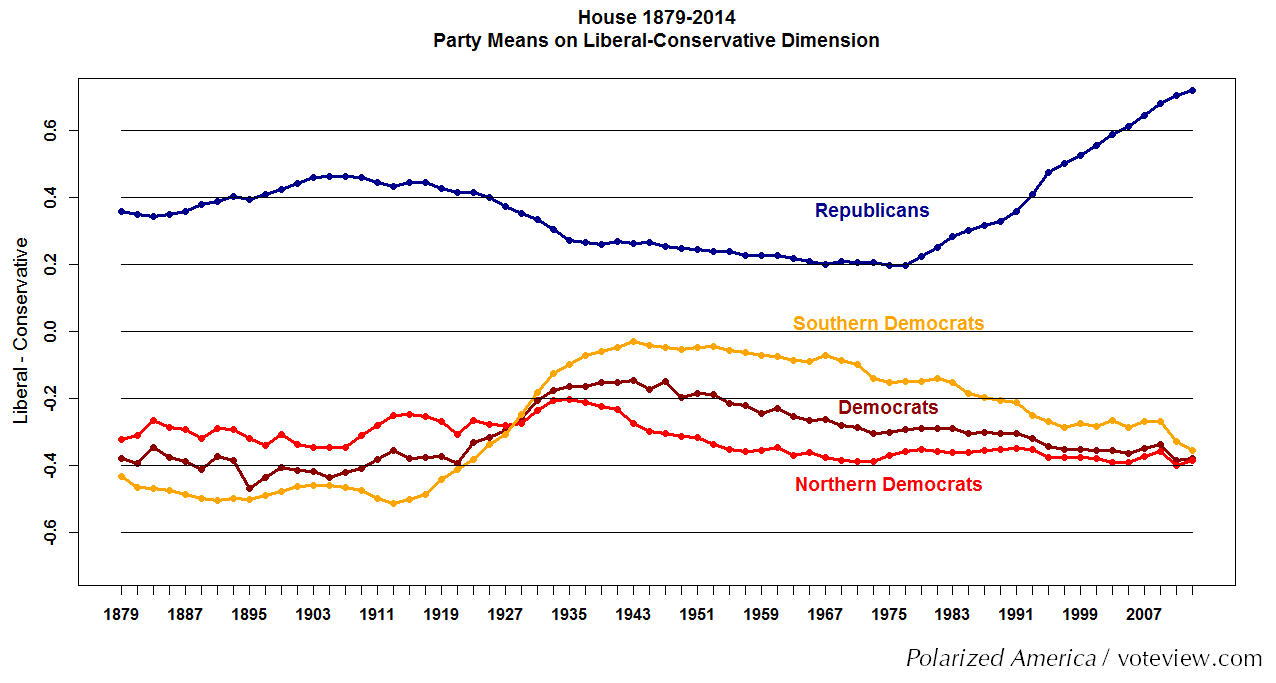 As is pretty widely understood, congressional Republicans have been moving rapidly to the right in recent years, while Democrats as a whole have barely budged ideologically. To the extent the Democratic caucus has moved leftward at all, that’s largely been due to the departure of some Southern whites from their membership.

Now, to be fair, Wehner is talking about the parties, not just the parties in Congress. So while Congress is a good place to examine these things (it’s where most national policy ideas are debated and voted on, and we have great records), he could have some broader concept in mind. But absent any aggregate data or described broader concept, Wehner is just cherry-picking, largley by claiming that President Obama is governing far to the left of where President Clinton governed two decades ago. For his evidence, he claims that Obama nationalized health care while Clinton didn’t, Obama is far more embracing of gays and lesbian issues than Clinton, Obama is focusing on police abuses while Clinton added cops to the streets, etc.

There’s nothing systematic about this analysis, though, and if you examine the examples in any detail, they really don’t favor an argument that the Democratic Party has shifted radically leftward. For example, as Jamelle Bouie notes, Clinton’s health care reform proposal (which lost after being described as socialist) was further left of the one Obama signed. Meanwhile, Clinton’s embrace of gay rights in the early 1990s was, given where the rest of the country was, arguably a more liberal position for its time than any stance Obama’s taken on the topic. (Obama has hewn pretty close to public opinion on this issue.) And Clinton pushed for an expansion of the number of police officers because the country was in the middle of a crime wave that has since abated. Obama is dealing with the other side of that — a police force that is larger, better-armed, and freer of oversight than it needs to be given the lower crime rates of today.

So why is Wehner cherry-picking anecdotes instead of looking at aggregate data? Well, for one thing, the anecdotes are more favorable to his beliefs and his agenda. From his more conservative perspective, it looks like the Democrats are rapidly drifting leftward. Also, the conventional wisdom that it’s the Republicans that are rapidly polarizing just gets stale after a while, like any conventional wisdom. Wehner is trying to say something different from what people already believe and get noticed for it. But in this case, the conventional wisdom is right. You can say it’s a good thing or a bad thing, but either way, the bulk of recent polarization is coming from the Republicans.