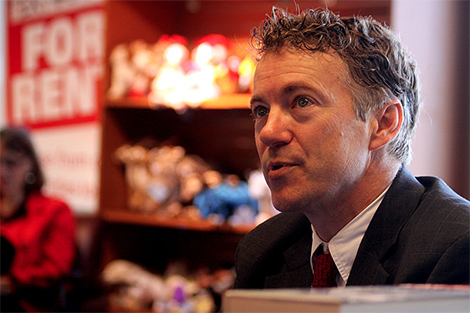 For all his efforts over the last few years to present a less radical, less ideologically rigid form of libertarianism, now and then Rand Paul says something that reminds you that he would prefer to live in Galt’s Gulch with the other “strikers” against the “slavedrivers of collectivism.” Buzzfeed‘s Andrew Kaczynski has the story:

“Now you can have some government, we all need government,” the Kentucky senator said while discussing Thomas Paine and the role of government at the local public library. “Thomas Paine said that government is a necessary evil. What did he mean by that?”

Paul said he believes that “you have to give up some of your liberty to have government,” saying he was “for some government.”

“I’m for paying some taxes,” continued Paul. “But if we tax you at 100% then you’ve got zero percent liberty. If we tax you at 50% you are half slave, half free. I frankly would like to see you a little freer and a little more money remaining in your communities so you can create jobs. It’s a debate we need to have.”

Now obviously if you assume the very existence of a minimal government represents a grudging surrender of liberty, there’s not a whole lot to “debate” other than the point of which the “slaves” are justified in revolting. What Paul is excluding by definition is the possibility that liberty requires government; that anarchy is not some ideal state of nature and that the untrammeled exercise of “liberty” by some is in fact slavery for others. Thus Paul really does help us to understand the essence of “constitutional conservatism”–the label he prefers to “libertarianism.” It connotes eternal and fixed limits on government, which exists mainly to ensure limitations on itself via contract law, criminal justice functions, and orderly markets. So even if 98% of Americans want to use their own elected government to achieve some collective purposes–goals they associate with the vindication of their own liberty–that’s off-limits. And we have the Second Amendment to ensure that liberty-loving Americans have a recourse to revolutionary violence if democratically established tax levels strike them as leaving them with too little of the liberty denoted in dollar bills.