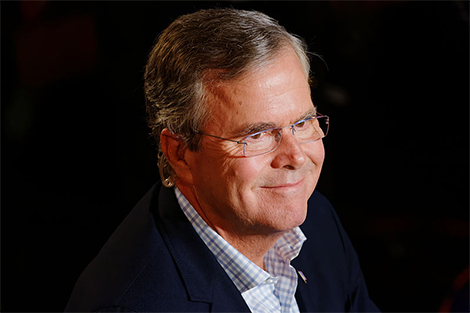 Anybody who’s read my book on the 2014 elections can surely appreciate my enthusiasm for an analysis of the GOP presidential field offered today by Bloomberg Politics‘ Ken Goldstein, which looks at the candidates’ record of “electability” from the point of view of the “two electorates” issue that’s become so important:

Six of the Republican contenders (Cruz, Graham, Huckabee, Jindal, Paul, and Perry) are from states that are reliably red—and have never faced electorates that would have the partisan distribution they would encounter in purple states. Two of them (Carson and Trump) have never ever faced any electorate whatsoever and one (Fiorina) ran and lost in a blue state.

But, even for those purple and blue state winners, presidential year electorates are fundamentally different than mid-term electorates. Presidential electorates are less white, younger, and more Democratic than mid-term electorates. And only one of the eight candidates who have previously won in blue or purple states has ever run statewide in a presidential election year. Jim Gilmore ran for Senate in Virginia in 2008 and lost by more than 30 percentage points. In fact, according to my calculations, of the 40 elections that the 17 announced or soon to announce GOP candidates have collectively run in at the state level (not all of them wins), only four of those contests were in presidential election years—Gilmore lost in Virginia in 2008, Lindsey Graham won re-election in South Carolina in 2008, Ted Cruz was elected in Texas in 2012, and Rick Santorum was re-elected in Pennsylvania in 2000. None of the other 13 candidates has ever faced statewide voters in a presidential election year.

This means that even candidates who’ve won in battleground states face significant hurdles. For example, Marco Rubio won election to the Senate in 2010 in an electorate which, according to the exit polls, was 71 percent white, and in which Republicans enjoyed a four percentage point (40 percent to 36 percent) advantage in party identification. In 2012, the Florida electorate was 67 percent white and Republicans suffered from a two-percentage-point deficit in partisan identifiers (33 percent to 35 percent). Looking at the voter file in Florida, of the approximately four million registered voters who vote in just about every election, Republicans have a five-percentage-point advantage. But among the three million-plus registered voters who vote only in presidential elections, Democrats have a six-percentage-point advantage.

Remember this analysis when you are tempted to look at a general election scenario and mentally put Florida in the GOP column for Rubio or Bush, or Ohio in the column for Kasich, or Wisconsin in the column for Walker (I don’t think anyone is going to assume New Jersey will go for Chris Christie or Pennsylvania for Rick Santorum or California for Carly Fiorina). None of them has faced a statewide presidential electorate.

To be fair, Jeb Bush was pretty heavily involved in one presidential general election involving Florida. But it took him a massive voter purge and a big assist from the U.S. Supreme Court to prevail.