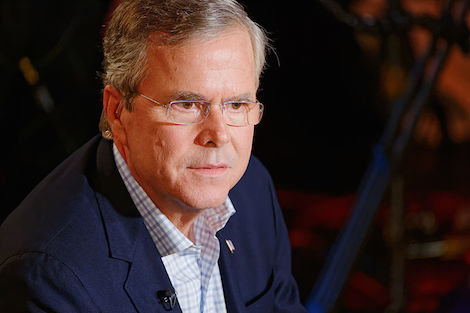 In the Art of War, Sun Tzu provided the following wisdom:

So, it is said that if you know your enemies and know yourself, you can win a hundred battles without a single loss.
If you only know yourself, but not your opponent, you may win or may lose.
If you know neither yourself nor your enemy, you will always endanger yourself.

When it comes to Jeb Bush’s understanding of Donald Trump, let’s just say that he really doesn’t have a clue.

Now, those close to his campaign say, Bush, who has taken on the mantle of frontrunner, is bracing for the possibility of a presidential debate pile-on — with Trump leading the charge.

Gaming out how Trump — a bombastic figure who refuses to abide by usual the rules of political decorum — will present himself has become a growing subject of speculation in Bush’s world.

During one recent phone call with a political ally, Bush pointedly asked about the surging real estate mogul. What, the friend recalled the former governor wondering out loud, was behind Trump’s antics, and what was he trying to accomplish?

I don’t think Jeb is alone in being perplexed about Donald Trump’s motives for running for president, but if he doesn’t know what’s driving Trump he’s going to have a hell of a time dodging his hand grenades.

“Trump presents a challenge for Bush because he’s a hand grenade,” said Nelson Warfield, a longtime Republican strategist who has prepared a number of candidates for debates. “His people understand that and will be prepared for anything that comes their way.”

As the Aug. 6 debate grows closer, some Republicans are relishing the prospect of Trump tearing the bark off the former governor — or, at the very least, trying to trip him up. “Trump has one target and one target only,” said an adviser to a rival GOP candidate. “He’s going to bring a lawn mower for Bush.”

Maybe Trump really is best understood as a hand grenade, in which case the damage he does will be somewhat equally dispersed but will also (by random chance) injure some more than others. On the other hand, maybe Trump is better understood as a heat-seeking missile who is locked in on Jeb, and really only on Jeb. If that’s the case, he should be a little more predictable and easier to parry.

In this Politico piece, we can see that advisers to rival GOP candidates are hoping that Trump is in this latter category, and it could be that they are correct.

Now, I know that politicians will say anything and we’re fools to take many of their utterances at face value. But if Jeb believes any part of the following, he doesn’t know his party and may not even know himself:

If Trump is a danger for Bush, some close to the former governor say, he also presents opportunity. The debate will give Bush a national platform to take on Trump in strong terms, presenting himself as a mature, substantive leader who rises above toxic discourse. Bush may have hinted at that approach during a campaign stop in Iowa on Tuesday. “Whether it’s Donald Trump or Barack Obama, their rhetoric of divisiveness is wrong,” the former governor said. “A Republican will never win by striking fear in people’s hearts.”

Striking fear into the hearts of Americans is pretty much all Fox News does, all day long, every day. There are almost two dozen Republican candidates for the presidency, and every single one of them is out there saying that our whole way of life is going to be destroyed.

Go ahead and try to find me the positive, Reaganesque messaging from these folks. I know Jeb aspires to be that guy, but he’s just not. And he’s going to get his ass kicked in the primaries if he doesn’t begin to understand why the crap Trump is pulling has launched him into a lead in the polls among Republicans.

Dubya once cracked this nut with a “compassionate conservative” gambit that was about as fraudulent as daddy’s thousand points of light. But the current mood of the Republican base is the farthest thing there is away from “compassionate.”

Does he know himself and his political clan well enough to understand what needs to be done to capture the hearts of the Republican right?

Because, if he doesn’t, he will always endanger himself when he goes into these debates. And it isn’t only Trump that he needs to worry about.

He’s going to be on a stage with nine other Republicans, none of whom are under the misimpression that the base seeks “a mature, substantive leader who rises above toxic discourse” or whom believe that “the rhetoric of divisiveness is wrong.”

If Sun Tzu was right, Jeb could be headed for Little Bighorn.