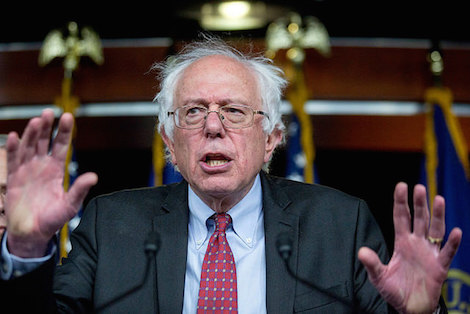 Going into what might have been expected to be a welcoming, hostile-to-Hillary (or at least determined to “keep her honest”) atmosphere at the Netroots Nation gathering in Arizona this weekend, Bernie Sanders and Martin O’Malley both had a problem in common that should have been foremost in their minds: questions about their appeal to the minority voters who play so large a role in post-Iowa-and-New-Hampshire Democratic nomination contest.

In O’Malley’s case, the problem became a near existential crisis right before his announcement of candidacy, when he was blamed by some for the toxic relationship between the Baltimore Police Department and that city’s African-American population. And in Sanders’ case, a political career in lilly-white Vermont compounded by suspicions he shared the old Socialist disdain for racial concerns as a distraction from class solidarity and the primacy of economics had fed a narrative (certainly one I shared) that he had a lot to prove to minority voters as compared to Clinton, who was very popular in that community in 2008 before Barack Obama became a viable candidate.

So both these men should have been fully briefed about the #blacklivesmatter movement, which is very explicitly an ongoing demand that politicians–including progressive politicians–not only take the “correct” position on law enforcement behavior towards African-Americans but rethink their priorities to leave no question about their determination to do something about it. Add in a venue where exclusion or expulsion of such protesters was unlikely and you had a predictable crisis for O’Malley and Sanders.

Neither of them did well when interrupted by the protesters. O’Malley kept responding by trying to say “All Lives Matter,” which very clearly missed the point that “color-blind” policies left African-Americans invisible and vulnerable. And Sanders kept trying to go back to his talking points, but really screwed up by bagging a series of subsequent meetings with the protesters and media interviews.

In the denouement Sander’s many progressive allies took to various media (especially Twitter) to defend his long record of support for civil rights, which led to a sardonic #berniesoblack response that suggested the defensiveness was another symptom of white progressive arrogance. As Dara Lind explained at Vox yesterday:

It’s worth noting that #BlackLivesMatter organizers haven’t been primarily focused on the presidential primary, even as other progressives have turned in that direction. To them, this is about the progressive movement. Bernie Sanders — and, more importantly, the pressure they feel to embrace Bernie Sanders as a progressive champion — is just the latest illustration that some white progressives aren’t listening to black progressives when deciding what the “progressive agenda” really is, and who its champions are. If Sanders were polling at 0 percent (like O’Malley) instead of polling in the mid- to high teens, it’s unlikely that #BernieSoBlack would have become a popular hashtag. It’s exactly because Sanders is being treated as a progressive champion that the activists who challenged him Saturday, and made jokes about his blackness Sunday, feel that, yet again, they’re being asked to put their own concerns aside and fall in line with what white progressives want.

Again, this is an old, not a new, story, so it’s unclear why and how Sanders managed to reinforce rather than reduce frustrations with him on this score. Looking like an annoyed deer in the headlines was the worst possible response. But it certainly offers him an opportunity to set the record straight and make a fresh start on the urgent priorities of African-Americans, which he was probably going to have to do anyway.

Meanwhile, for Hillary Clinton Netroots Nation suddenly changed from being an embarrassing moment where she avoided a difficult audience into a real problem for her Democratic opponents. But she’s now on notice, too: your talking points are not binding on anyone else.