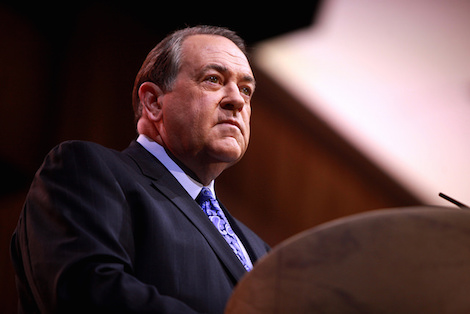 Something I was vaguely aware of but hadn’t really focused on came very much to my attention yesterday while we were taping this week’s WaMo BloggingheadsTV/podcast with guest Matt Cooper of Newsweek. Matt wrote a column that actually got Trump’s personal attention (leading to a brief interview) pointing out that The Donald’s hostility to “entitlement reform” and trade agreements along with his better known rhetoric on immigration had positioned him well to appeal to a distinct segment of Republican voters: non-college educated white voters, a.k.a. the white working class:

In the 2014 midterms, 64 percent of noncollege-educated white voters favored Republicans. “You are talking about people who are deeply alienated from American life, both culturally and economically,” says Ronald Brownstein, a political analyst who has written extensively on the subject.

These new blue-collar Republicans are more skeptical of free trade than the right’s traditional base is. And that’s created a major shift in the party. A Pew Research Center study in May found that Republicans, more than Democrats, believe free trade agreements cost them jobs, which bodes well for Trump since the leading Republican candidates largely support free-trade agreements. Marco Rubio and Ted Cruz voted for fast-track authority for the Trans-Pacific Partnership—an essential step for ratifying the agreement—although on Tuesday, Cruz said he wouldn’t back fast-track, insisting he wanted, among other things, amendments that would limit immigration in future trade deals. And Jeb Bush and Scott Walker support it. Others oppose the deal, mainly due to the secrecy involved in the negotiations. But none are as vocally opposed as Trump.

His free trade position isn’t Trump’s only appeal to Republican voters; he’s also in line with most of the GOP’s base on entitlements. A majority of voters in both parties oppose reducing programs such as Medicare and Social Security. Not surprisingly, whites who haven’t gone to college tend to be adamantly opposed to slashing the safety net.

The flip side of all the talk about Democratic prospects to regain some of the white working class vote (see our most recent roundtable on the subject here at WaMo in conjunction with The Democratic Strategist, based on Stan Greenberg’s advice in the current issue of our magazine) is that this demographic has entered the Republican coalition without necessarily internalizing the economic views of GOP elites. So much as the “Reagan Democrats” represented a potentially rebellious segment of the Democratic coalition back in the day, today’s blue-collar Republicans are vulnerable not just to a “raid” from Democrats but from heretical Republicans who defect from party orthodoxy on hot-button issues like trade and entitlements. That’s probably an important part of Trump’s otherwise mysterious constituency.

But you know who was positioning himself to occupy this same ground? Mike Huckabee, as I observed back in May.

It will be interesting to see if he seeks and gains attention for being (most likely) the only candidate in a huge presidential field to take issue with the Republican congressional leadership’s push to win approval for Obama’s Trans-Pacific Partnership trade agreement. More importantly, the heavy, heavy investment of Republican politicians in budget schemes that depend on reductions in Social Security and Medicare spending will give Huckabee constant opportunities to tout his newly stated opposition to such cuts as a betrayal of promises made to middle-class workers who’ve been contributing payroll taxes their entire lives. Beyond that, two candidates — Chris Christie and Jeb Bush — are already on record favoring reductions in retirement benefits that go beyond the highly indirect voucher schemes associated with Paul Ryan.

Since then Huck has run a strangely desultory campaign, missing a lot of opportunities for earned media and making most of his noise competing with Bobby Jindal as to who can get most hysterical about imaginary threats to Christianity. He’s also showing his old incompetence in fundraising.

So Huck has languished in the polls even as Trump surged, and the final indignity had to be Trump getting all of the attention at an event–last weekend’s Family Leadership Summit in Iowa–that definitely should have been prime Huck Country.

I guess it’s possible that if Trump fades quickly Huckabee can batten on some of his supporters, though they seem to be a more secular crew than the God, Guns, Grits and Gravy folk. But more likely Huck will burnish his reputation for being a politician with more potential than performance.