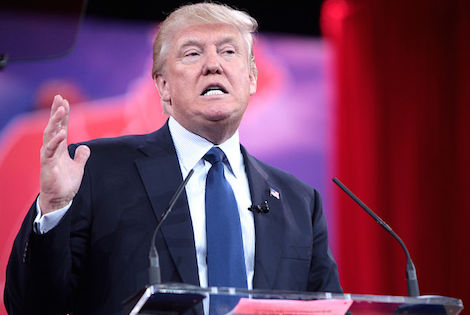 At FiveThirtyEight today Harry Enten does us all the favor of providing a coldly rational, clear-eyed look at the most likely consequences of a Donald Trump independent bid for the presidency. He offers two history-based doses of reality to Democrats excited about the huge poll numbers Trump registered in this week’s WaPo/ABCNews poll in a hypothetical three-way race against Jeb Bush and Hillary Clinton. First of all, third-party candidates never do as well in actual elections as in early polls; the centripetal pull of the two major parties increases the more the third-party vote potentially matters. And second of all, there’s just no clear evidence of one of these indie or third-party runs actually deciding an election, even in 2000 where the two-party vote in the decisive state was so close you could make a case for just about anything mattering most.

But having said all that, Enten goes on to note Trump is unusual because he seems to be drawing the vast majority of his vote from the GOP column. So if he runs and winds up drawing, say, better than 5 percent of the vote (the WaPo/ABC poll had him at 20%), he’d become very damaging to the GOP’s prospects.

I’d add something else to Enten’s analysis that goes beyond 2016. Trump appears to represent a revolt against the GOP Establishment by a large demographic that objects to elite Republican economic policies and is massively mistrustful of Establishments in general. In that respect the Trump phenomenon reminds me of the unsettling effect on Democrats of George Wallace’s 1972 nomination campaign. After Wallace was shot and terminated his campaign, virtually his entire vote went into the Republican column in November, confirming V.O. Key’s great insight that third-party voters are usually in transit from one major party to another.

I’m by no means predicting that if Trump doesn’t run as an indie the large share of white working class voters who appear to love him will defect and go to Hillary Clinton. There are large and well-known reasons white non-college educated voters defected from the New Deal Coalition to begin with. But I will suggest their unhappiness with the GOP makes them an unstable and unpredictable quantity for the immediate future, and that cannot be good news for the Republican Party.