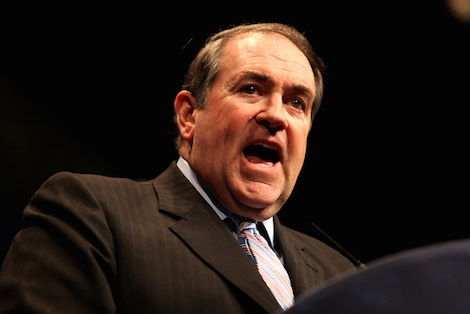 I’ve been observing for a good long while now that the sunny, optimistic Mike Huckabee of the 2008 presidential campaign cycle is way long gone, replaced by an angry and paranoid culture warrior who thinks of himself as leading a revolt of Real Americans against the decadent coasts–you know, the Sarah Palin lane over there on the far Right of the bowling alley.

But the dude’s really outdoing himself at the moment, making a complicated diplomatic initiative as simple as a gas chamber during an interview with the Breitbartians:

This president’s foreign policy is the most feckless in American history. It is so naive that he would trust the Iranians. By doing so, he will take the Israelis and march them to the door of the oven. This is the most idiotic thing, this Iran deal. It should be rejected by both Democrats and Republicans in Congress and by the American people. I read the whole deal. We gave away the whole store. It’s got to be stopped.

Huck’s very proud of his solidarity with Israel, a country he’s visited many times. But this time his zeal for the people destined to kick off the End of Times earned him a rebuke from the Anti-Defamation League, which polices inappropriate Holocaust analogies that cheapen memories of the real thing.

So why would he Go There?

Political analyst Barack Obama had this to say all the way over in Ethiopia (per ABC’s Arlette Saenz):

On his first day in Ethiopia, President Obama waded into the 2016 presidential campaign, criticizing Republican presidential candidate Mike Huckabee for suggesting the president is trying to push Israelis to the “door of the oven” with Iran nuclear deal.

“The particular comments of Mr. Huckabee are I think part of just a general pattern we’ve seen … that would be considered ridiculous if it weren’t so sad,” the president said in a news conference in Addis Ababa, Ethiopia.

“Maybe this is just an effort to push Mr. Trump out of the headlines but it’s not the kind of leadership that’s needed for America right now,” the president added.

Alternatively, shouting about ovens is the sort of thing you’d expect from a candidate nervous about making the Fox News debate 10-candidate cutoff, which will be executed a week from tomorrow. At the moment, though, Huck is in a comfortable 5th place in the RCP polling averages. Maybe Huckabee’s trying to drown out and help shove off the stage some more endangered rivals for the Christian Right vote like Bobby Jindal and Rick Perry.

Or just maybe Huckabee really is an example of why the ADL needs to keep up its thankless task of warning pols away from Holocaust analogies. After all, Huck is a veteran of the Legalized Abortion Is a Holocaust meme, repeated most notably during his David Lane-faciliated tour of Europe and the Holy Land last year, designed to train conservative pastors and pols in how to emulate Margaret Thatcher, Pope John Paul II and Ronald Reagan in fighting the infernal forces of secularism and defending Greater Israel:

If you felt something incredibly powerful at Auschwitz and Birkenau over the 11 million killed worldwide and the 1.5 million killed on those grounds, cannot we feel something extraordinary about 55 million murdered in our own country in the wombs of their mothers?

So Huck sees Holocausts in every direction, all facilitated by the same Secular Socialist Evil Ones. And it’s a bit hard to stay off the hate train when you believe–or just pretend to believe–your political opponents are the heirs of Hitler.