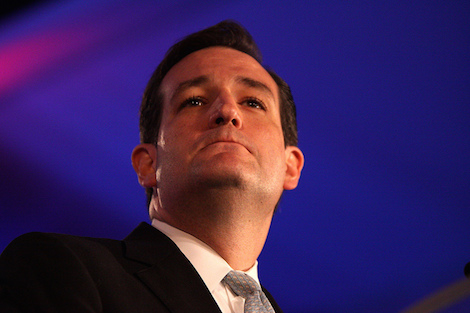 As we were taping this week’s episode of BloggingheadsTV/Podcast earlier today (the guest was Politico‘s Michael Grunwald, who recently wrote a fascinating analysis of transportation politics in Scott Walker’s Wisconsin), Paul Glastris asked me an unexpected question about Ted Cruz’s weekend shenanigans in the Senate over the transportation bill: “What would a guy like Ted Cruz consider victory?” And my kneejerk reaction was: “Either an actual substantive voting win, or the opposite: a defeat where he’s alone in standing up to the Republican Establishment.” A nice situation to be in, eh?

In any event at Ten Miles Square today Martin Longman addresses the same issue, going into a long more detail about the parliamentary ins and outs than I have, and also making it clear Republican senators were rebuking Cruz for calling Mitch McConnell a liar. But then he concluded:

If you like Republican food fights, this is a pretty good one. And Cruz is on the side of opposing Iran, Planned Parenthood, the Affordable Care Act, and the Export-Import Bank.

Who do you think the base will support in this spat?

Exactly. The more Republican senators disagree with Cruz, the more he can make his case to “the base” that he’s a singularly brave and principled conservative in a den of cowards led by sellouts.