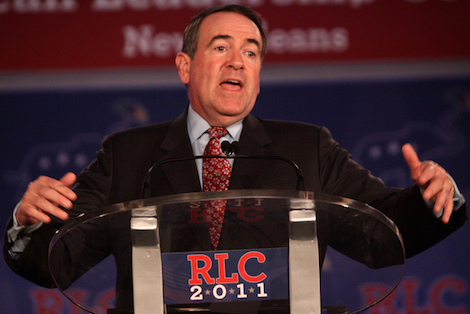 After mulling over the pithy remarks of renowned nuclear proliferation expert Mike Huckabee about the Iranian nuclear deal marching Israel to “the oven door,” I was interested to see what my old boss Sam Nunn, who devotes nearly all of his time to the Nuclear Threat Initiative, had to say. Amazingly, he’s not in hysterics (per the Atlanta Journal-Constitution‘s Daniel Malloy:

Nunn spent much of his Senate career on nuclear non-proliferation and now runs the Nuclear Threat Initiative. Here’s a piece of what he told Denis O’Hayer and Jim Burress WABE-90.1 FM…:

“When you read all of it, notwithstanding it’s far from a perfect document, it’s pretty clear that the answer to that is it’s going to be a lot harder for the Iranians to get a nuclear bomb over the next 10 or 15 years. …

In another part of that radio interview, Nunn said this about the risks involved in rejecting the deal:

In my view it would isolate us from the international community on this Iranian question, and it would make every one of these difficulties with Iran–including the nuclear weapon preventing that from happening and including their behavior–much worse. So those people who are adamantly opposed to this agreement and there’s all sorts of reasons you could be opposed. In fact, there is almost no constituency for it. The opposition got all the constituency here, but you have to ask what are the consequences for turning this down. In my opinion, the consequences would be very severe.

Guess it depends who you trust on highly complex issues like this: a former governor of Arkansas whose interest in foreign affairs seems pretty much limited to confirming biblical prophecy, or the former long-time chairman of the Senate Armed Services Committee who is focused like a laser on reducing the risk of nuclear war or nuclear terrorism.

I know it’s a tough choice, but I’d say it’s Nunn by a hair.