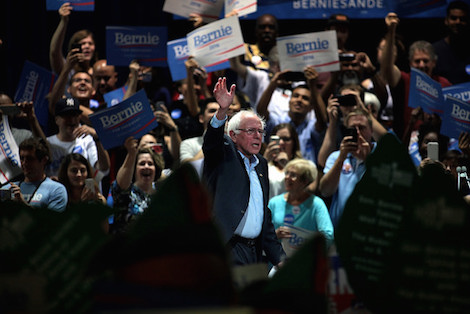 There’s an interesting article up at Bloomberg Politics by Arit John that asks and only partly answers a pretty good question: what’s Bernie Sanders doing spending time in the Deep South at this stage of the Invisible Primary?

He’s drawing big crowds, as he always seems to do. But it’s hard to avoid the impression that spelunking into the Deep South is more symbolic than real: not an investment of candidate resources in a coherent strategy for victory, but an effort to refute the journalistic stereotypes that confine him to a small, white, ideological constituency limited to the northeast and to atypical Caucus states like Iowa. Indeed, there’s some evidence the whole southern show is really designed to make an impression on early-state voters who want to back a potential winner, as the veteran “strategist” Tad Devine, who’s on Team Sanders in this, his eighth presidential campaign, admits to John:

According to Tad Devine, Sanders’s campaign advisor, there are three major reasons to campaign in every state: to introduce the candidate to different constituencies, to help build a national campaign infrastructure, and to get over what Devine called the “threshold of credibility” in Iowa, New Hampshire, and South Carolina.

“I’ve seen how important that vote is to people who participate in those events,” Devine said during a phone interview, referring to voters in the early state caucuses and primaries. “They take it very seriously and they won’t waste it on a candidate who they don’t think is a serious, credible, national candidate.”

But there may be something else going on: reviving the legacy of fellow Vermonter Howard Dean’s “50 state strategy.”

To be clear, I was a strong supporter of said strategy, which if it had been implemented more fully might have mitigaged some of the downballot damage Democrats have suffered in the last two midterm elections. But there’s a practical side to remaining at least marginally competitive in difficult territory, and a magical side: the belief there is some hidden majority for Democrats–or in an intra-party context, for loud-and-proud progressives like Sanders–in the most unlikely places.

That’s probably an illusion, but a useful one in keeping enthusiasm high for Sanders’ supporters. And at some point if he continues to do relatively well in Iowa and New Hampshire, magical thinking could again turn practical, since Sanders really does need to prove he can cut into HRC’s presumptive majorities among African-Americans, preferably in the first southern state on the calendar, South Carolina. Perhaps his occasional forays into the South are preliminary calisthenics for that.

I guess this is as good a place as any to express a note of skeptical sympathy for Devine, who along with his frequent campaign collaborator Bob Shrum, has had a long career in Democratic presidential politics without ever being associated with a general election winner. I remember a John Kerry event early in the 2004 cycle when Devine was introduced by IAFF president Harold Schaitberger, who put his arm around the consultant, rattled off a list of his unsuccessful presidential campaigns, and said “Maybe the seventh time will be the charm.” Afraid not.