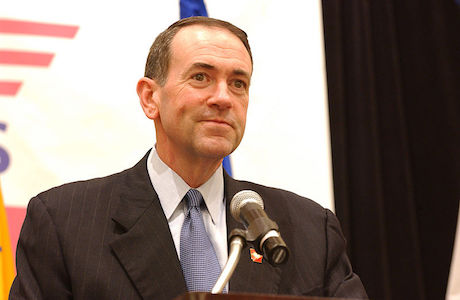 I commented at the beginning of today’s Lunch Buffet that conservatives like Mike Huckabee who constantly try to associate liberals with Nazism are typically practicing the sort of “politics of cultural despair” that was highly associated with fascism in Europe in the 1920s and 1930s. I had not at that point read Jeet Heer’s essay at TNR suggesting that the perennial habit of writers at National Review of calling liberals National Socialists (Kevin Williamson) or fascists (Jonah Goldberg) might reflect a sort of corporate bad conscience at the magazine’s own ambivalent legacy towards the Far Right. And as part of that case, Heer brings in the famous contretemps between NR founder William F. Buckley and Gore Vidal (the subject of a new documentary) during national network coverage of the 1968 national conventions when Vidal implied that Buckley was a “pro- or crypto- Nazi” and Buckley started shouting homophobic epithets at Vidal before a shocked Howard K. Smith could intervene and send them to their separate dressing rooms. This in turn becomes Heer’s rationale for exploring the Buckley family’s ambivalent attitude towards Jews, fascists and Francisco Franco.

This is all fascinating and entertaining stuff. But in the spirit of Occam’s Razor, I’d say there is a simpler explanation for Williamson’s and Goldberg’s ridiculous “liberal fascist” taunts: a longstanding libertarian meme, which I believe began with Ludwig von Mises, that created a spectrum on which at one end stands communism and fascism together, and at the other the Founders’ vision of strictly and permanently limited government. The idea that intervention in the economy by a nation-state is the meaning of “national socialist” is how Williamson gets to Bernie Sanders belonging to the Hugo Chavez wing of “Nazism,” as though race is a variable and disposable element in that creed. I haven’t read Goldberg’s book, but I’d be willing to bet he doesn’t spend a lot of time talking about European fascism’s intimate relationship with the churches and with cultural traditionalism of every sort.

But back in the day, NR’s writers were struggling with the real, not the theoretically attributable beast called fascism, and the only thing no one much said about it is that it had any connection to liberalism or democratic socialism other than total hatred.

I suspect Jeet Heer knows a lot more about this history than do Kevin Williamson or Jonah Goldberg, so no, I don’t think they are reflecting some “bad conscience” over events involving the Buckleys or NR before they were born.

But Mike Huckabee may be another matter. No, I don’t think there’s a whiff of racism in Huckabee’s political stylings, certainly compared to a lot of other Republicans. His professed intense loathing of the Nazis seems entirely genuine, if not his efforts to equate the Nazis with liberal baby-killers (the Nazi regime had some of the strongest anti-abortion laws in history). But I’d say there’s more than a whiff of Spanish Francoism–a melange of anti-democratic fascism, hyper-traditional clericalism, and social identification with property owners–in Huck’s overall orientation, especially his increasingly conspiracy-theory oriented rap on the destruction of old-fashioned Americanism by evil coastal elites. The Francoists, of course, were dealing with enemies (e.g., the unusually powerful Spanish Anarchists) who really did want to destroy traditional marriage and burn churches, in sharp contrast to the rather laughable threats being faced by Huck’s martyrs, Chick-fil-A, Duck Dynasty, Hobby Lobby and the Bakers and Florists of Conscience. But I do wonder occasionally if people like him would welcome a good cleansing counter-revolution like the scourging of Spain that Franco supervised for so many violent and tragic years.