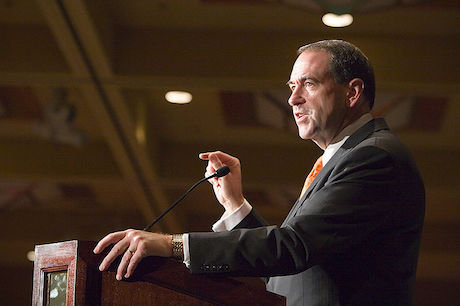 Reading the coverage of Mike Huckabee’s over-the-top suggestion that in reaching a nuclear deal with Iran Barack Obama would “take the Israelis and march them to the oven door,” it occurred to me there was limited awareness of Huck’s history of using Holocaust analogies. So I wrote it up for TPMCafe.

Much of the column involved Huck’s serial comparisons of legalized abortion to the Holocaust–which he keeps coming back to despite protests from the Anti-Defamation League and Holocaust survivors. Due to limitations in space, I did not get into the dark underside of this anaology for some Christian Right activists who treat themselves as counterparts to the resistance to Hitler, justified in taking extralegal, violent or even revolutionary steps (viz. the famous 1996 colloquoy at the “theocon” journal First Things, where an array of conservative luminaries debated this very proposition).

Beyond analogizing legalized abortion to the Holocaust, Huck has been involved in some significantly more elaborate efforts to convince his audience that we’re living in a revived Nazi Germany (with features, too, of the Soviet Union) where not only the “unborn,” but Christians and Jews are in danger of extinction by the hosts of the wicked. He’s been intimately connected with a series of pilgrimages organized by the famous Dominionist organizer David Lane, financed by the virulently homophobic American Family Association, that retrace the steps of Ronald Reagan, Margaret Thatcher and Pope John Paul II that led them to their climatic victory over communism, with the object of inspiring today’s conservatives to take similarly bold stands against abortion, gay marriage, and alleged threats to the State of Israel. One trip in which Huckabee served as the personal tour guide targeted ministers and political activists from early presidential nominating states.

I’ve been fascinated with Lane’s religio-political tourism operations for a good while because they seem designed to inculcate a paranoid worldview in which liberals are at best Good Germans complicit in unspeakable evil, and at worst are, well, murdering millions of babies and leading the Israelis “to the over door.” But it’s been hard to get a clear description of what the tours involve. Then yesterday I stumbled on a November 2014 column at Townhall by Christian Right journalist/activist Bethany Blankley that connected the dots and showed the purpose of the Huck-led The Journey: A Spiritual Awakening was to make participants constantly aware of the similarities between 1930s Germany and contemporary America and Europe.

So is it any wonder Huck the presidential candidate is quick to bring up the Holocaust at the drop of a hat, and in multiple contexts? Connect this mindset to the theory of the Second Amendment as authorizing a preparation for revolutionary violence, as Huck pretty clearly endorses in his latest book, and any residual idea that the former Arkansas Governor is this sunny individual who is a “conservative but not mad about it” should be abandoned.