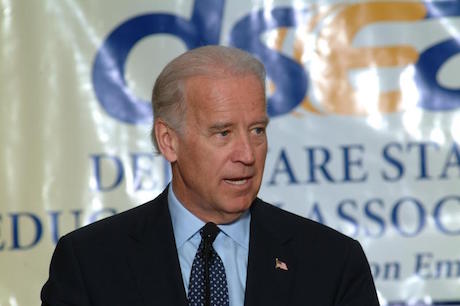 It’s no secret that a lot of Democrats are taking a rooting interest in Donald Trump’s Godzilla routine and the chaos it is causing in the GOP presidential nominating process.

But hard as it is to contemplate any analogy that pairs The Donald with the Vice President of the United States, it’s interesting that a lot of people on the Right seem fascinated–more than Democrats, actually–with the possibility that Joe Biden could leap into the Democratic contest.

Some of this “reporting” and “analysis” is couched in concern trolling about what Biden offers Democrats that Hillary Clinton doesn’t; for Kraushaar it’s an appeal to those swing voters HRC has abandoned in her pursuit of Elizabeth Warren supporters.

But without question, the beating heart of this right-wing interest in Biden is the likelihood that his entrance into the field would signal some sort of Democratic Establishment (and/or Obama administration) recognition that HRC just ain’t cutting the mustard. That’s worth celebrating in conservativeland for two reasons. The obvious one is the fear that HRC remains the most formidable Democratic candidate, particularly given her potential appeal to women who might otherwise vote Republican. The less obvious factor that progressives should keep in mind is that conservatives have had issues with HRC for a long, long time–back to those days in the administration of her husband when she was universally considered the leader of the Left-Wing faction in the White House, and a much-loathed symbol of feminism. Watching her presidential ambitions go down in flames for a second and final time, especially early in the process, is nearly as exciting a prospect on the Right as the vision of Barack Obama handing the keys to the White House over to Scott Walker or Ted Cruz or Marco Rubio. So yes, watch towers all over the Right will remain vigilant for signs of a Biden candidacy until such time as he, or the calendar, rules it out.

UPDATE: Just noticed that today Jennifer Rubin, an on-message partisan if ever one has lived, offered this “best advice to Republicans:”

Don’t bet that Hillary Clinton will be the nominee. Get started on researching Vice President Biden, who may prove to be a much tougher opponent than the scandal-plagued Clinton.

Yeah, “Biden ’16” is officially in the GOP talking points.