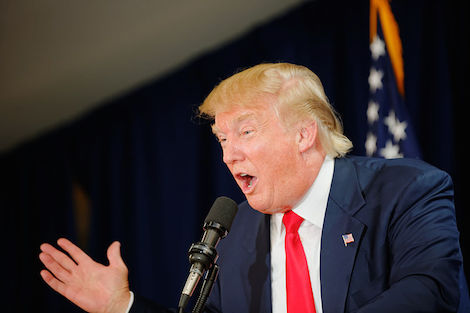 I’m glad I didn’t join Matt Bai’s twelve-step program towards reduced coverage of Donald Trump today, because The Donald has done a signal service to public debate by coming right out and endorsing the implicit immigration policy of much of the Republican Party (per a report from CNN’s Jeremy Diamond):

Donald Trump, the Republican presidential hopeful who shot up to the head of the pack over his controversial comments about illegal immigrants, is finally starting to lay out an immigration policy.

Trump said Wednesday in an interview with CNN’s Dana Bash that as president he would deport all undocumented immigrants and then allow the “good ones” to reenter the country through an “expedited process” and live in the U.S. legally, though not as citizens….

Trump would not say how he would locate, round up and deport the 11 million undocumented immigrants he says must go. Instead, he deflected, saying that while it may be a task too tall for politicians, it isn’t for a business mogul like himself.

Yeah, sure: it’s just a management problem, and any tycoon worth his salt can figure out a way via universal hourly traffic stops and police raids on workplaces and maybe house-to-house searches to “find them,” and then it’s just a matter of setting up a few thousand transit camps and deploying a few hundreds of thousands of cattle cars to round ’em up and “get them out.”

Estimates of the cost of mass deportation of the undocumented start at about $265 billion and range on up from there; one key variable is whether a sufficiently terroristic atmosphere would encourage some of these people to “self-deport,” as Mitt Romney surmised. Trump might even claim some of these folk will self-deport to get a prime place in the line to reenter the country as a permanent helot class if they pass muster. In any event, it would indeed make this country a very different place.

Now that Trump’s forced this issue right out in the open, it’s time for us all to ask him and other Republicans who won’t endorse a path to legalization exactly how much they are willing to spend in money and in lost civil liberties to implement their plans. No sense weaseling around and dog-whistling this issue any more.