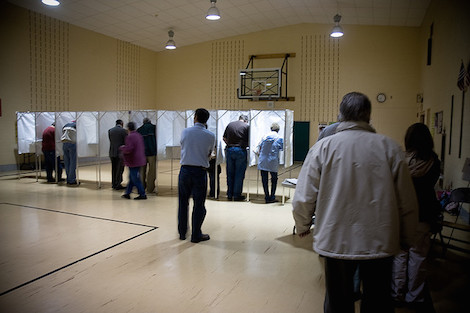 At Bloomberg Politics yesterday, Ken Goldstein offered the most ingenious (if somewhat technical and indirect) critique I’ve heard of the Fox News poll-based debate participation cutoff: national polls of Republicans vastly over-represent the views of people who likely won’t ever vote in a primary or caucus.

In 2012, 19 million Republicans took part in the nominating contest. In a more competitive race with a wider GOP field in 2008, 21 million took part in the nominating contest. On the other side in 2008, for some additional context, in the highest number of voters ever to take part in a nominating contest, just over 37 million took part in Democratic primaries and caucuses. (By the way, want to start a fight in Hillary Clinton’s Brooklyn HQ, ask old Obama and Clinton staffers who won the most votes and what should have been done with Michigan and Florida vote totals.) And, in the 2012 general election, Mitt Romney received 61 million votes. Put another way, the Fox News-survey, and most other surveys of Republican primary preferences are using samples that represent target populations that are nearly equal to the total number of votes that Mitt Romney received in the general election in 2012, about three times as large as recent primary electorates and almost twice as large as the record-shattering Democratic primary electorate in 2008. While there are lots of candidates and some enthusiasm on the GOP side, it is not likely to approach 60 million, as the Fox and other recent polls assume.

But let’s think about that for a minute. The percentage of partisans who vote in the nominating contest is not just a function of interest or involvement. The main reason the numbers usually wind up so low is that people stop voting when the nomination’s decided. And the reason the 2008 Democratic nomination contest drew such a high level of voting is precisely that the Obama/Clinton competition went right down to the bitter end.

Right now we have no way of knowing how long the 2016 GOP competition will last, and thus how many voters will have any real reason to participate. Contra Goldstein, you could even make the claim that these polls are more representative of Republican sentiment than the votes that will eventually be cast. In any event, the real problem is that nobody’s figured out any alternative way to deal with a seventeen-candidate field.