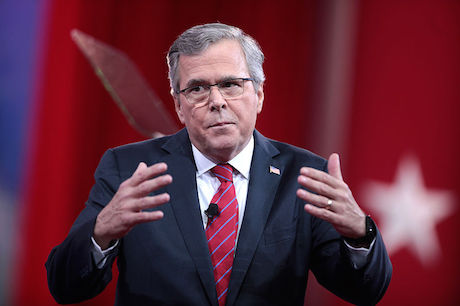 Until the eve of his presidential campaign, Jeb Bush was director of a philanthropy that gave tens of millions of dollars to Planned Parenthood and financed its advocacy of “unrestricted access to abortion” around the world. The charity also approved money to global abortion providers while he sat on its board.

In 2010, Jeb was named one of the founding directors of the Bloomberg Family Foundation, established as a tax-exempt foundation to advance the vision of former New York City Mayor Michael Bloomberg. He resigned from the board at the end of 2014 to prepare his presidential campaign.

That’s the lede from a story being disseminated by the Canadian-based anti-choicer web site LifeSiteNews, bylined by its U.S. bureau chief, Ben Johnson.

As you might suspect, the timing is really bad for Jeb. Worse yet, it’s a reminder that his family (including Poppy until he ran for president) used to be big-time supporters of the organization that’s now being depicted as a bunch of satanic Nazi baby organ sellers.

Normally you’d figure his role in the Terri Schiavo saga would have exorcised Jeb’s dirty family laundry among the RTL crowd. But now there’s this. Betcha Jebbie gets downright athletic in his efforts to outpace other GOP candidates in the campaign to defund Planned Parenthood.