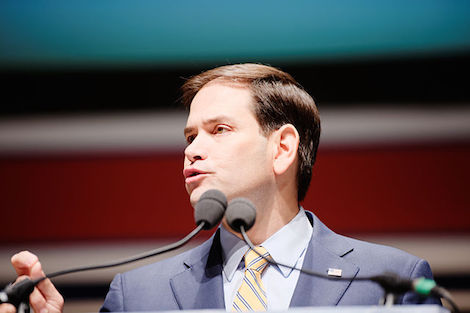 Now that the mystery of the Fox News Top Ten has finally been resolved, you can expect media attention to shift towards the GOP presidential candidates who haven’t fallen off the face of the earth but are currently underperforming. Byron York takes a look today at the one-time smart-money-favorite Marco Rubio:

The verdict was clear when Marco Rubio announced his presidential run with a well-received speech in Miami last April: There was a new member of the top tier in the Republican race. “The official 2016 GOP field gets its first real contender,” wrote fivethirtyeight. “Marco Rubio is now a first-tier candidate,” said Bloomberg’s Mark Halperin. Washington Post columnist Michael Gerson placed Rubio, along with Jeb Bush and Scott Walker, in “the first tier of plausibility.”

It got even better from there. In June, the Washington Post declared, “Marco Rubio is now at the top of the Republican presidential field.”

The polls seemed to support those bright assessments. Rubio went from seventh place in the RealClearPolitics average of polls, with 7.3 percent of the vote, on the eve of his announcement, to third place just two weeks later, with 10.6 percent. By early May he was in second place, behind Bush, with 14.3 percent. The idea that Rubio, Bush and Walker comprised the GOP’s top tier settled into conventional wisdom.

But now that has changed. In the latest RCP average, Rubio has fallen back to seventh place in the race, with 5.2 percent of the vote — pretty much where he was before his announcement. “Rubio’s springtime rise in the primary polls has faded, even as a nonprofit backing him has blanketed Fox News with TV ads about his foreign policy cred,” writes National Journal. “He’s basically back to where he started before a post-campaign launch bump.”

The default explanation for every recent development in the GOP contest is “Donald Trump,” but York sees no evidence that Rubio’s been disproportionately affected by The Donald. Marco’s problem is Jeb Bush:

“Rubio has an even bigger challenge,” said [Alex] Castellanos. “Jeb Bush is beer, and Rubio is lite beer. [Bush] has a more mature brand in his category. Many voters see Rubio, charismatic as he is, as Jeb Bush without the experience. In NASCAR terms, Rubio is drafting behind Jeb’s car and only has a chance if Jeb’s car hits the wall and clears the way ahead, so voters can pay attention to him.”

Ah, yes, Republican strategists sure love them some NASCAR analogies.

In any event, whether or not Jeb is a strategic or psychological barrier to Marco, he’s sure a practical obstacle, partly because Rubio is a very likely target of massive barrages of nastiness from Bush’s Super-PAC, and partly because there’s probably no path to Rubio’s nomination that doesn’t include beating Jeb in the March 15 winner-take-all primary in Florida.

But as York notes, if Bush stumbles Rubio’s still got the fundamentals to move back to the top of the field: very positive favorable-unfavorable ratings and acceptability to all wings of the party.

And so there were probably major cheers in Rubio’s camp when Jeb Bush again showed himself yesterday as capable of committing a dumb gaffe at any moment. If he mishandles his remarks dissing women’s health issues as badly as he did the simple question of whether the Iraq War was in retrospect a mistake, it could not only be a problem in itself, but it could saddle Jeb with the terrifying fear that in the clutch he’ll pull the kind of self-imploding stunt Mitt Romney managed with his “47%” comments in 2012.