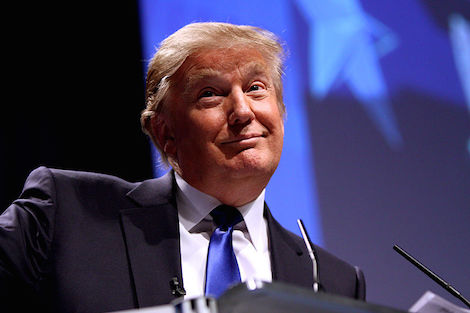 I sometimes wonder if Brian Tashman of RightWingWatch, People for the American Way’s indefatigable eye on the religious right, has to spend a day now and then watching multiple episodes of Daniel Tiger’s Neighborhood or similar fare to detoxify his mind with sweet and happy images. He might need that today after reporting on the sudden wave of “prophecies” by people associated with WorldNetDaily to the effect that Donald Trump was sent by God as some sort of pre-apocalyptic sign to America to “repent!” before Jesus returns to set the world on fire.

You can read the whole thing (you might want to check out the Daniel Tiger viewings in your area first as a precaution), but what jumps out at me is the highly compelling data point these birds offer that the word “trump” appears twice in the King James Version (you know, the one God dictated in his Own Tongue) of the Book of Revelation for the trumpet that will announce the end times. Couldn’t be a coincidence, could it?

Now without a doubt this country has sins the Almighty might want to scourge, and I suppose you could make the argument that Trump as a presidential candidate is an appropriate and even exquisite scourge for an America suffused with greed and celebrity-worship. To Trump, we are all the “losers” our culture scorns in its veneration of the Golden Calf of “success.” But at the risk of being too partisan, I prefer to think Trump represents a message to Republicans to get a grip.