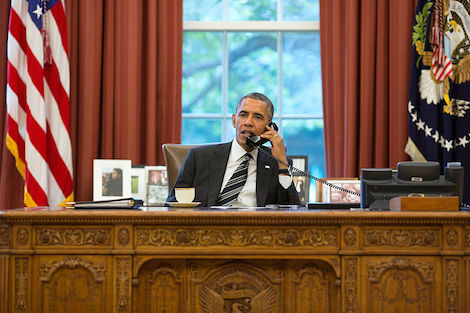 As I wrote yesterday, I was particularly struck by President Obama’s description of his approach to the negotiations with Iran as a way to “find openings” that could lead to transformative change. I realized that I had missed how he talked about the same thing in an interview with David Remnick back in January 2014.

Obama, who has pressed Netanyahu to muster the political will to take risks on his own, thinks he can help “create a space”—that is the term around the White House—for forward movement on the Palestinian issue, whether he is around to see the result or not.

Right now it looks like the possibility of a space for movement on the Palestinian issue is not likely during President Obama’s term. But in what I think is the major news story from last week, we are already beginning to see the possibility of an opening when it comes to the ongoing civil war in Syria.

With President Bashar al-Assad of Syria facing battlefield setbacks, diplomats from Russia, the United States and several Middle Eastern powers are engaged in a burst of diplomatic activity, trying to head off a deeper collapse of the country that could further strengthen the militant group Islamic State.

Russia, Mr. Assad’s most powerful backer, has built new ties with Saudi Arabia, a fervent opponent, and even brokered a meeting between high-ranking Saudi and Syrian intelligence officials. On Tuesday, the Saudi foreign minister, Adel al-Jubeir, met with the Russian foreign minister, Sergey V. Lavrov, in Moscow, wrangling over the fate of Mr. Assad.

Unusual meetings have come in quick succession. Last week, the top Russian, American and Saudi envoys held their first three-way meeting on Syria; Russian officials briefed Syria’s foreign minister, Walid al-Moallem. He then met officials in Oman, whose ties to both Saudi Arabia and Iran raised the prospect of talks between those archrivals. Russia stopped blocking an international inquiry into who has used chemical weapons in Syria, a longstanding American priority.

And then on Friday came this announcement:

Iran is to hold talks with the six members of the Gulf Cooperation Council (GCC) on Syria and Yemen in September, a high ranking Iranian foreign ministry official has said.

It is hard for a lot of Americans to grasp what a huge realignment is happening here. The main Sunni/Shia battle lines in the Middle East have traditionally been drawn between Saudi Arabia (a leading member of GCC) and Iran. As such, Iran has typically supported the Alawite (a branch of Shia Islam) government of Assad, while Saudi Arabia has a history of funding Sunni terrorist groups like Al Qaeda and ISIS.

Furthermore, as we saw in the response to Assad’s use of chemical weapons a couple of years ago, Putin has not only supported the Syrian dictator, he has tremendous power and influence over him. If all of these countries begin to see it in their interests to negotiate a consensus on how to end this civil war, that would be groundbreaking – not just for Syria – but for the Middle East as a whole. It is exactly what President Obama laid out as his vision for that region of the world when he talked to Remnick.

Ultimately, he envisages a new geopolitical equilibrium, one less turbulent than the current landscape of civil war, terror, and sectarian battle. “It would be profoundly in the interest of citizens throughout the region if Sunnis and Shias weren’t intent on killing each other,” he told me. “And although it would not solve the entire problem, if we were able to get Iran to operate in a responsible fashion—not funding terrorist organizations, not trying to stir up sectarian discontent in other countries, and not developing a nuclear weapon—you could see an equilibrium developing between Sunni, or predominantly Sunni, Gulf states and Iran in which there’s competition, perhaps suspicion, but not an active or proxy warfare.

It hasn’t happened yet, and the article by Anne Barnard ends with this caution:

As the Jordanian newspaper al-Ghad concluded, with grudges “dug deep over half a decade, with all the blood spilled and hatred that has been spread,” ending conflict among entrenched armed groups will mean “offering concessions and dealing in details, each one of which contains a thousand devils!”

Regional news outlets have attributed the outburst of diplomatic activity to the aftermath of the tentative nuclear deal with Iran, which “has thrown a great stone into the region’s waters,” as the Jordanian newspaper Al Ghad put it. The pan-Arab daily Rai al-Youm went so far as to declare that “a political resolution is taking shape with notable speed.”

To the extent that these realignments are successful, what they accomplish is to further alienate the extremists – be they the hardliners in Iran or terrorists like ISIS. As that happens, the pressure mounts on Prime Minister Netanyahu to decide whether he will join in the realignment or further alienate himself as an extremist.

It all reminds me of something Jonathan Chait wrote over five years ago about “the Obama method.” In his example, we might soon see Nentanyahu’s Israel in the role he ascribes to Iran.

The thing that people haven’t figured out about President Obama’s conduct of foreign policy is that it’s the same as his conduct of domestic policy. Obama believes in the power of negotiation and public dialogue to split his adversaries – Republicans at home, Islamists abroad – and strengthen his own position…

[Obama’s strategy] does not presuppose that his adversaries are people of goodwill who can be reasoned with. Rather, it assumes that, by demonstrating his own goodwill and interest in accord, Obama can win over a portion of his adversaries’ constituents as well as third parties. Obama thinks he can move moderate Muslim opinion, pressure bad actors like Iran to negotiate, and, if Iran fails to comply, encourage other countries to isolate it. The strategy works whether or not Iran makes a reasonable agreement…

This apparent paradox is one reason Obama’s political identity has eluded easy definition. On the one hand, you have a disciple of the radical community organizer Saul Alinsky turned ruthless Chicago politician. On the other hand, there is the conciliatory post-partisan idealist. The mistake here is in thinking of these two notions as opposing poles. In reality it’s all the same thing. Obama’s defining political trait is the belief that conciliatory rhetoric is a ruthless strategy.