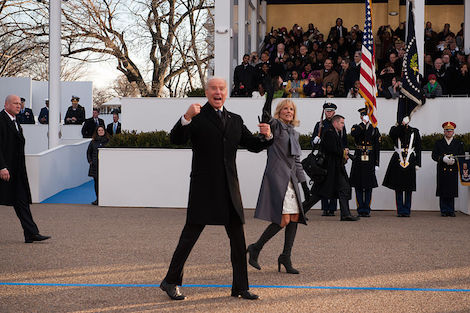 I’m on record expressing extreme skepticism that the Vice President of the United States wants to run for president a third time, and also arguing that it would likely be a bad idea. But what the hell: until the man makes a Sherman Statement people will keep talking about it, and if you are from Biden’s very small home state of Delaware, there’s probably a lot of pressure on Democratic politicians to jump onto the bandwagon even if it turns out to be imaginary. Or so that’s how I would interpret this item from the Wilmington (Delaware) News Journal‘s Jon Offredo:

Biden has “a lifetime of advocacy on behalf of the middle class and unbelievable experience, knowledge and insight into foreign policy,” Markell said midday Monday after a roundtable at the Council of State Governments’ Eastern Regional Conference in Wilmington.

Biden is still mum about whether he’d join the Democratic pool of candidates vying to run for president in 2016, but speculation began to mount after New York Times columnist Maureen Dowd published a column saying that Beau Biden, just before his death from brain cancer earlier this year, pleaded with his father to seek the candidacy.

Since then, Biden supporters have urged the vice president to run and Congressman John Carney, a potential gubernatorial candidate, has pledged his support.

Now I’m reasonably sure Markell and Carney have better actual intelligence on Biden’s plans than does MoDo, but that’s how media memes work: when a New York Times columnist starts the ball rolling, it’s hard to stop even if you doubt its existence.

But wait, there’s more reason to speculate about Biden ’16:

Biden was vacationing in South Carolina last week, where national media reported that he was calling potential allies to explore a potential bid for the office.

I’m reasonably sure “national media” means the Wall Street Journal, which ran a piece on August 12 based, best we can tell, 100% on the testimony of a single South Carolina state legislator who wants Biden to run. For all I know, the South Carolina Draft Biden Committee is composed entirely of this dude and former SC Democratic Party chair Dick Harpootlian.

But why would Biden vacation in South Carolina if he wasn’t running? Why? Why?

Just for fun, let me ask readers to talk in the comment thread about their own favorite phantom presidential campaigns that never transpired. Kennedy ’84? Cuomo ’88? Nunn ’92? Gore ’04? Webb ’16? Oh, wait….