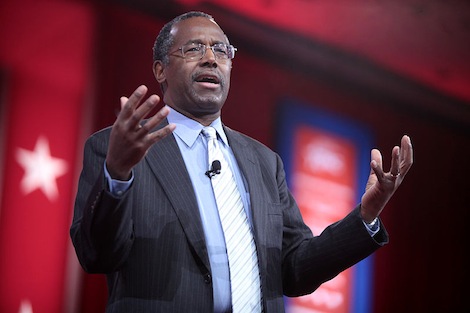 Most political writers have taken a swing at the curveball proposition of Ben Carson’s presidential candidacy (I’ve had multiple plate appearances!). I’d say the CW is pretty neatly divided between those who just view him as Herman Cain 2.0, a flavor-of-the-month outsider who gets attention and support for being an African-American true believer in a very white party, and those who think he represents a sort of weird and benign underside of the Trump phenomenon. A few people like me are paying attention to the lunatic dog whistles he regularly emits, and you wonder if others will finally begin to notice them.

But the Atlantic‘s Russell Berman has done everybody the favor of going to Iowa and seeking to discern whether the man has an actual campaign on the ground that could pay off on Caucus Night if he remains as popular as he is today. And the tentative answer is–well, yes and no. Here’s what I found most interesting:

“I still think he’s not a threat,” said one veteran Iowa operative with a rival GOP campaign, who also called Carson’s campaign in the Hawkeye State “a smokescreen.” Carson, the operative said, has benefitted from enthusiastic support among the evangelical, home-school community. “The home-school group is motivated. They’re close-knit, and they organize themselves,” the operative said. But he’s also facing more competition for that bloc than did Huckabee in 2008 or Santorum in 2012, and the rival operative argued that Carson has less of a presence in Iowa both in terms of his staff and his own personal visits, which rank in the middle of the pack among the many GOP contenders. “I think that come caucus night, you’ll see him get 12 or 13 percent,” the operative said. “He won’t go below. He won’t go above. His floor is his ceiling.”

Ah yes, the Iowa home-schoolers, that great symbol of the rich soil this state with its Caucuses provides to intensely self-focused interest and advocacy groups, and the unlikely conservative evangelical base for Ron Paul’s 2012 campaign. If you were going to pick a small right-wing interest group to back you in Iowa, the home-schoolers wouldn’t be a bad choice as an organizational hub. And Carson’s got money, though rumor has it a lot has been raised and then spent on direct mail, possibly to the benefit of some of the good doctor’s rather shady backers.

Maybe the “operative” Berman quotes has it right that Carson’s floor in Iowa is also his ceiling, but when a hostile local reaches that conclusion you also have to conclude that the Cain 2.0 hypothesis doesn’t sound right, aside from the fact that there’s no sign of a sex scandal on the horizon for him (though I do wonder if all those Iowans in the livestock business realize that the same Seventh-Day Adventist background that makes Carson so knowledgeable about the Bible also led him into vegetarianism). So for the moment, you have to figure Carson is indeed for real.