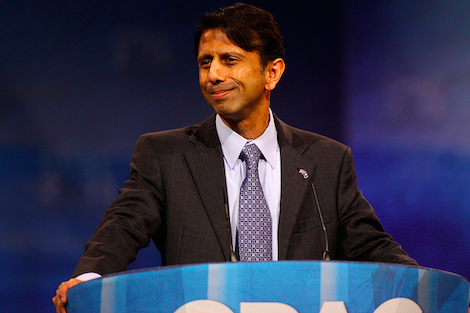 Well, this is going to be interesting. Donald Trump’s Twitter account has been silent most of the day, and so we haven’t seen any response to Bobby Jindal’s supreme act of provocation at the National Press Club. He is going to be on Greta van Susteran’s show tonight, so maybe he’s saving up some heat-seeking missiles to send Bobby’s way. Will he make exorcism jokes? Mention how reluctant Bobby is to spend time in the state he is supposedly governing, or how unpopular he is there? Mock Jindal’s campaign for resorting to attacks on Trump to get some attention? No telling.

But blowback aside, Jindal’s speech is pretty amazing. It very, very carefully distinguishes between Trump and Trumpism, holding up the latter even as it tears down the former:

I like that he doesn’t care about political correctness.

I like the fact that he says things people are thinking but are afraid to say.

I like that he uses Ronald Reagan’s theme of making America Great Again.

But Trump doesn’t really believe this stuff, because he only believes in himself.

So Bobby’s offering himself as the vehicle for Trumpism without Trump, or as he puts it, a “politically incorrect conservative revolution.”

I’m not sure what that would look like in practice, but in Bobby’s version it seems to begin with treating Trump the way Trump treats Mexicans: denouncing him in terms that burn any conceivable bridges to smithereens. Indeed, if I were advising Bobby, I’d be a bit worried that he won’t be able to sign the very “loyalty pledge” Trump has signed, which commits the candidate to support of the GOP nominee, even if it’s Trump.

I mean, seriously, listen to this:

Many say he’s dangerous because you wouldn’t want a hot head with his fingers on the nuclear codes. And while that’s true, that’s not the real danger here.

The real danger is that, ironically, Donald Trump could destroy America’s chance to be Great Again.

As conservatives, we have a golden opportunity in front of us. The Democrats have terribly screwed things up, and are basically giving us the next election.

If we blow this opportunity – we may never get it again, the stakes are incredibly high.

It’s true Trump might launch a nuclear war, says Bobby, but “that’s not the real danger here.” Hillary could win the election!