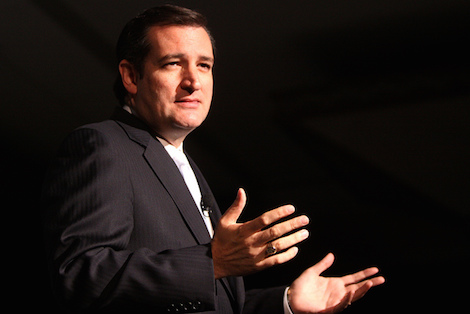 I’ve been warning for months now that the pressures of the GOP presidential nominating process and rank-and-file conservative fury at undocumented immigrants and those people protesting police behavior could produce a good ol’ 1960s-70s style race-fueled “law and order” backlash. Add in an alleged “crime spike” and a front-running presidential candidate who seems to be conducting a Nixon/Agnew/Wallace revival tour–getting that “silent majority” back together again!–and you’ve got all the ingredients for unlearning all the lessons of the past few decades.

Until very recently, fears of a backlash were mostly an unfocused and sotto voce theme among the bipartisan group of thinkers and actors and gabbers committed to criminal justice reform, the unraveling of policies (especially the mandatory minimum sentencing laws associated with the “war on drugs”) that led to the mass incarceration of non-violent and/or low-level offenders, which had a devastating impact on minority communities. But now there is a very specific object of those fears: a piece of legislation that perfectly reflects the kind of attitude that created mass incarceration in the first place.

It’s called “Kate’s Law,” named after Kate Steinle, the young woman shot to death (apparently inadvertently) on a San Francisco pier by a man who had been repeatedly deported for illegal presence in the United States among other crimes. And its centerpiece is, of course, mandatory minimum sentences, in this case for illegal reentry by people who have been deported; indeed, the official title of “Kate’s Law” is the Establishing Mandatory Minimums for Illegal Reentry Act of 2015.

It’s most appropriate that the great tribune of emotionally driven bad ideas, Bill O’Reilly, is leading the charge for Kate’s Law (per a report from Matt Ford at the Atlantic):

“The word mandatory is crucial,” O’Reilly told his audience. “There are laws on the books now that are being ignored. Congress must write Kate’s Law so if officials do not enforce the mandatory sentence, they themselves can be prosecuted.” Steinle’s parents endorsed the measure in a July 13 interview with O’Reilly. The House bill currently has 45 cosponsors; Senator Ted Cruz drafted an identical version in the Senate on July 14.

Kate’s Law is by no means simply rhetorical:

If the proposal became law, its impact would be dramatic. “Kate’s Law would suck up every dime you saved from criminal-justice reform and negate it,” said Molly Gill, a government-affairs counsel at FAMM [Families Against Mandatory Minimums]. Undocumented immigrants typically serve between 15 to 18 months in prison under the current sentencing laws before deportation, Gill said. O’Reilly’s proposal would boost that average by 300 percent. Housing the Kate’s Law inmates for longer periods of time would cost the U.S. Bureau of Prisons an estimated $2 billion per year, according to FAMM. The bureau’s annual budget request for all of 2015 was $7 billion.

It’s going to take some real courage for Republican pols to resist this sort of thing. Maybe Rand Paul’s up to it because he’s been so publicly committed to criminal justice reform for so very long as a signature issue. But aside from Trump and Cruz, who are clearly cheerleading for a backlash, and Walker and Christie, who have had at best mediocre records on criminal justice reform as governors, this is going to be big-time idiot bait for candidates struggling to look tough on immigrants and criminals and those disorderly people of color generally who just won’t stay in their place and respect our laws and the officers who enforce them.