Steven Holmes has written a fascinating article that goes against a lot of the conventional wisdom in politics today.

Last September, 50% of people responding to a CNN/ORC International poll said they believed that “things are going” either “very well” or “fairly well” in the country. It was the first time that at least half of the poll respondents felt that good about the state of the nation since April, 2013, and only the sixth time that measure, which is asked every few months, cracked the 50% mark since August, 2006.

It was not a fluke. Two months later, 52% of people said things were going “very well” or “fairly well” in the country. And in March of this year, 53% of people polled said they felt that way.

But then, this summer the presidential campaign heated up, and the country’s mood went south. In May, the percentage of people who felt things were going relatively well dropped six points to 47%, and last month that number came in at 48%.

So what caused this mood change? Holmes gives you a pretty good hint at his answer to that question when he notes that it happened about the same time that the presidential campaign heated up.

“It is certainly the case that one of the effects of a presidential campaign is that one side will be raising criticism of the incumbent administration and the job it is doing,” says Charles Franklin, director of the Marquette Law School Poll. “So it is not unreasonable to think that when voters hear messages from their candidate we would expect them to become more negative about the state of the country.”

And as Republican candidates, especially Trump, keep up a constant drumbeat on how terrible things are, their loyalists’ moods followed suit. Indeed the biggest slump in the country’s mood occurred in Republicans. In March, 33% of Republicans told CNN that things were going “very” or “pretty well” in the country. By August that figure had dropped to 21%. Notably, the biggest falloff is seen in men, people making less than $50,000 a year and those who have not attended college — the core of Trump’s support.

But it’s not just the Republicans.

And the most energy on the Democratic side is being generated by Bernie Sanders, who doesn’t let a day go by without reminding everyone how the middle class is being screwed.

There is a strain of political punditry which asserts that people are angry and it is important for candidates to join them and express it on their behalf. But Holmes is asking an important question that we need to consider.

Could it be that candidates like Trump are not just tapping into the voters’ anger, but also fomenting it?

I think he captures the question perfectly. It would be ridiculous to deny that there is a growing sense of anger at our politics. The question is whether or not our candidates are fomenting it for political gain or facilitating engagement and problem-solving. Marshall Ganz, who teaches about community organizing at Harvard’s Kennedy School of Government, explains the difference.

It seems to me that what we are seeing these days is that a lot of people are responding to the anxiety with fear. They are either withdrawing from politics altogether or striking out in anger. That is because fear is the response of a powerless victim. Right now there is a strain in our culture that seems to be all about a competition for who is the most victimized. That is what leads us to assume that we need a Green Lantern kind of leader or an authoritarian bully to solve our problems for us. Never mind what those solutions are…just fix it.

The late great Molly Ivins once warned us about that: 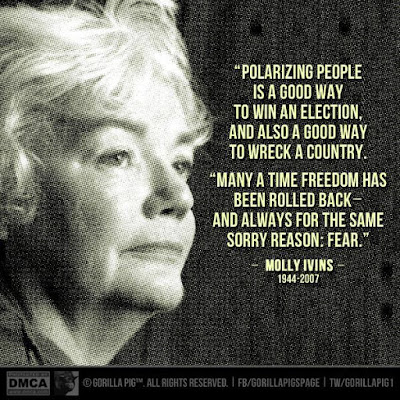 One of my favorite writers, Jonathan Odell, is documenting on Facebook a back-and-forth conversation he is having with the editor of his hometown newspaper in Laurel, Mississippi over their support for Donald Trump. He really captured the essence of what is happening with this:

Jim, you got me wrong, I do hope you get a chance to vote for Trump. That will mean the Republican Party has finally lost it’s collective mind and is willing to go down on a Ship of Fools. But that should be no surprise. You can’t run a party for three decades on the idea that people who know something are the enemy, and then be surprised when people want to follow an idiot…

There are obviously many like you who are so discouraged that they would rather throw a tantrum in the voting booth than cast a vote for a person with an actual plan-of either party…There is catharsis in blowing up, I guess. But here’s an idea, instead of blowing up, how about growing up?

That’s really the question before us…do we want catharsis or are we ready to grow up? If we’re interested in the latter, what we need is a candidate who can acknowledge our anxiety and engage us as adults with actual plans that inspire our hope for the future.