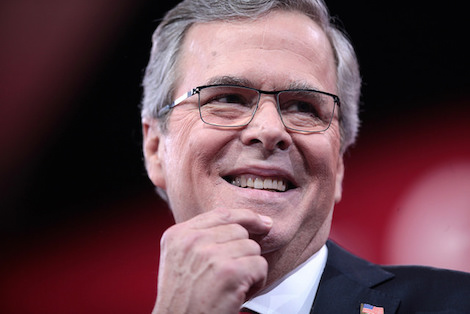 In the game of football, offenses are typically designed to move the ball through a combination of power and misdirection plays, with the latter (fakes, reverses, and devices to “spread the field” and confuse defenses) mostly used to create the former. You can tell Jonathan Chait is a football fan from his very apt description of Jeb Bush’s “new” tax plan as being a very clever exercise in misdirection:

The overall structure of Bush’s plan is crystal clear. It is made of good old-fashioned, gigantic, regressive, debt-financed tax cuts, just like his brother used to do. Politically, Bush’s plan runs into the party’s classic resource-allocation problem: Tax cuts whose benefits overwhelmingly accrue to the very rich mean less money to finance spending programs that benefit a much broader share of the population. Taking stuff from the many and giving it to the few is bad politics because the many have more votes. Bush’s solution to this dilemma involves a number of misdirection attempts.

1. Emphasize the hedge-fund loophole. The narrative news stories all led with the news of Bush’s plan eliminating the carried-interest loophole, a completely unjustifiable giveaway to hedge-funders that Republicans have long refused to eliminate. And that is a positive step. But it is a tiny one, accounting for less than one percent of the size of the revenue lost by Bush’s tax cuts. The Bush campaign bought some great press coverage very cheaply by having its minuscule tax hike on the rich obscure its overwhelmingly larger tax cuts for the rich.

2. “Growth.” The Bush campaign has circulated estimates that its tax cuts will cost $3.4 trillion if you assume no effect on economic growth, but only $1.2 trillion if you share its optimistic projections. Such a deal! But this range of outcomes frames the question squarely on the Republican side of the playing field. Why should we assume that deep tax cuts would help economic growth at all? Bill Clinton raised taxes on the rich, and conservatives predicted disaster, but a boom followed. George W. Bush cut taxes for the rich, predicted faster growth, and produced a mediocre recovery. After the Bush tax cuts on the rich expired in 2013, economic growth has accelerated. This doesn’t prove higher taxes on the rich yield higher growth, but it certainly casts doubt on the theory that cutting them from current rates will do any good at all. And, indeed, a Brookings study found that the Bush tax cuts slightly reduced economic growth — an assumption that found its way into the wonkosphere’s coverage, but not the political narrative coverage. CNN, unbelievably, reports, “It’s not clear if Bush’s tax plan would be revenue neutral,” when even the delusionally optimistic forecasts of the Bush campaign itself concede a $1.2 trillion revenue loss.

Chait goes on to discuss intentionally vague “trade-offs” the plan calls for, which implies spending cuts without risking the political fallout from identifying them. But the heart of his argument is that political journalists have mostly bought the misdirection and are reporting a very old and very conventional Bush tax plan as new and cool and even, hilariously, “populist.” The “wonkosphere” is very much onto Jeb’s act, but its influence remains limited. And so, Jeb is able to turn a weakness–he, like his brother, is in thrall to wealthy interests and cannot conceive of an economic “plan” that doesn’t begin with giving them pretty much all they want–into a perceived strength: Jeb wants to cut your taxes and jump-start the economy, O ye middle-class voters! It is indeed the very essence of a misdirection play, and unfortunately, it’s working better than it should, just like one of those fancy-dan spread offenses that count on the slow wits of journa–er, I mean, defensive coaches.