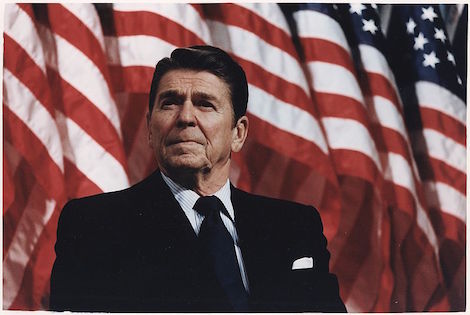 We’re all use to citing Reagan’s “heresies” on individual issues, but when you put them end to end as this report does, it’s pretty remarkable.

[A]t critical moments on critical issues, Reagan took positions that are anathema to the leaders of today’s Republican Party—advancing sensible immigration reform, supporting pollution control, curbing nuclear arms, closing tax loopholes for the wealthy, and advocating gun background checks. As president, Reagan passed immigration reform with a path to citizenship for millions of undocumented immigrants. He also passed a landmark treaty on the climate and raised taxes 11 times. He even negotiated with America’s main adversary, the Soviet Union, signing a treaty with the communist nation to reduce nuclear weapons.

And this doesn’t even count Reagan’s pre-presidential sins against conservatism, such as the liberalized abortion law he signed as governor of California, or going back further, his one-time status as a union “boss.”

These comparisons would be mostly of historical interest–documenting the long right-ward slide of the GOP after the presidency of the man who first conquered the party for the conservative movement–if it were not for the idolatry of Reagan that’s still a red-hot cult today. I guess it would be too much to hope CNN debate moderators Jake Tapper and Hugh Hewitt (no way ol’ Hugh would go there!) would ask the candidates about these contradictions, wouldn’t it?