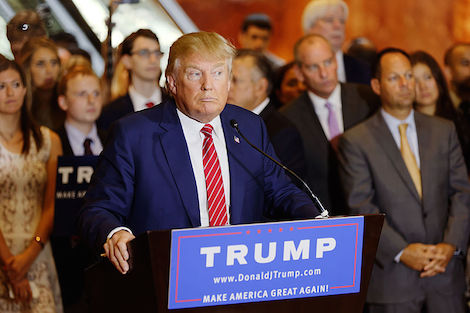 I guess this is Trump Panic Day (or perhaps week, depending on what happens in Wednesday’s GOP candidate debate), and the best sign of that is not so much the reports of angst on Wall Street as the reaction of everybody’s favorite Insider Journalist, Bloomberg Politics‘ Mark Halperin, who has written a piece mainly remarkable for its analysis of the GOP race as a death match where Donald Trump gets “killed” or everybody dies! Right from the get-go, Halperin gets his thug on:

In the modern era, the Republican nomination has been won by the combatant who is best at playing a game of kill-or-be-killed. In the end, becoming the standard bearer has not been about the daily polls, the staff hires, the policy speeches, the fundraising, the cattle calls, the promised agenda. It’s been about having the skill and confidence to stamp out anyone who threatens you, using a combination of negative TV ads, candidate and major surrogate attacks, and planted opposition research.

Thus, says Mr. Game Change, the name of the game in 2016 is “killer” (the piece deploys a variation on that word 18 times), and Donald Trump is a stone killer who must be killed first. But how to kill the killer without getting killed? That’s the toughie.

Other than adding to the general state of hysteria over Trump and reflecting the Party Elites’ efforts to talk themselves into a more lethal posture towards a candidate they fear, Halperin does offer one nugget of insight: the would-be Trump-killers are divided and somewhat confused on which kind of ammunition to use.

The current thinking on possible frames falls into four distinct but overlapping stratagems:

1. Trump can’t be trusted because he is an egomaniac with a bad character (his business dealings; his bankruptcies; his two divorces; his insulting statements about women; his casinos; his compulsion to name things after himself; his hazy answers about his own faith; and his aggressive use of eminent domain).

2. Trump is a liberal and unprincipled (past support for single payer, the Clintons, House Democratic Leader Nancy Pelosi, and abortion).

3. Trump is not close to being fit to be a serious president or commander-in-chief (his recent answers on foreign policy; his lack of specifics on almost everything).

4. Trump is a politician, not a businessman/outsider (his long-time retention of Beltway lobbyists; his self-serving campaign contributions; his courtship of local, state, and national officeholders).

All of these frames have some potential, according to those who wish to end Trump’s domination of the Republican nomination process. But picking one (or two), and driving the message to success is as difficult as it is vital to his foes. There is by no means consensus on which of these frames will work or how to flesh them out.

One school of thought, according to my reporting, is to go with an amalgamation of “deals and females,” on the theory that those are Trump’s twin vices and the opposition could use those issues to at least pry away some parts of his current coalition and bring his poll numbers down closer to the pack. The hope is that should Trump’s numbers go lower, he will get rattled, his aura of invincibility will dissipate, and his mojo will be disrupted.

You get a mental image of Halperin sitting in a half-lit Italian restaurant with the members of Murder, Inc., planning their next hit. It’s pretty hilarious, but that’s how tense it’s getting in the Republican side of the Village:

Trump’s rivals used to believe he would kill himself within weeks of entering the race. Then they believed that the press would kill him off before Labor Day. Now, many of them privately answer the question “Can Trump be killed?” by saying, quietly and with a combination of frustration, wonder and doubt: I hope so.

Again, if it weren’t for the real-life consequences, it would be tempting to cheer Trump on, if only for the comedic value of what he does to people like Halperin and his sources. Betcha he doesn’t know any Trump supporters, either.