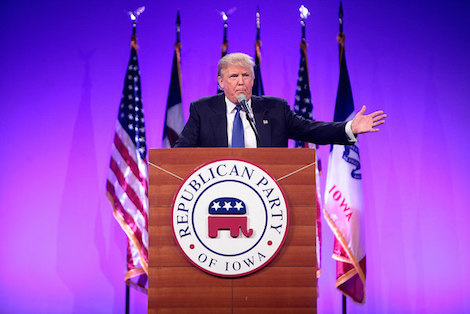 At TNR Brian Beutler provides a succinct overview of the state of the Republican presidential race going into tonight’s CNN debate. The basic problem the GOP has isn’t just Donald Trump: it’s a field in which all the prospective Establishment saviors–Bush, Kasich, Rubio and especially Walker–are doing very poorly.

Those four establishmentarian candidates are in the grip of a severe collective action problem. Were one of them the consensus choice of the GOP donor class, the current field would look a lot like the one in 2012, with Carson in the role of a flash in the pan candidate like Newt Gingrich or Herman Cain. Trump would be the key difference between the two fields, but with Rubio or Kasich holding steady at 20 percent, in a field clear of other establishmentarian candidates, he could safely be considered, in [Ramesh] Ponnuru’s words, a nuisance, not a nightmare.

As it stands now, even if somebody within or beyond the field “takes down” Donald Trump, there’s no particular reason to assume it will benefit the party elites’ candidates. In fact, the two candidates enjoying the greatest buzz going into tonight’s debate, Carson and Fiorina, are the most likely beneficiaries of any Trump stumble. And while they aren’t as terrifying to Republican elites as Trump, they’d be considered disastrous as potential nominees if Trump was not around. Who’s going to take them down?

Now the people who make up the Republican Establishment are not complete idiots. They know they will soon run out of time to make this a “normal” presidential cycle where serving in Congress or holding a statewide elected office (in the past or present) is the absolute minimum qualification for a viable presidential candidate. So we may soon see them begin to consolidate in a big way behind a single candidate. And that could begin tonight if the right candidate gives them the raw material for a boom.

Who will that be? Their logical choice is obviously Jeb Bush, who has already won the Money Primary. But the man is a walking bullseye for the “outsiders” in the field as well as for Democrats. Any Republican watching Bush’s feckless efforts to box with Trump has got to deeply fear that Jeb is Mitt Romney with a glass jaw. My guess is we’ll see a Rubio Boom unless his personal financial problems are so bad he cannot survive a public vetting.