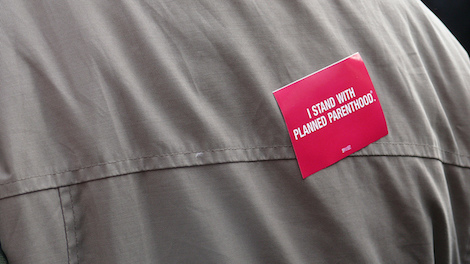 Even as Carly Fiorina’s mendacious disquisition on Planned Parenthood last night encouraged those who want to shut down the government over funding for that organization, congressional Republicans continued to run for cover to the big mainline antichoice organization, the National Right To Life Committee, per a report from the AP’s Alan Fram:

Hoping to prevent the Republican uproar over the Planned Parenthood videos from snowballing into a government shutdown, GOP leaders are turning for help to polling data and one of the nation’s most powerful anti-abortion groups.

At a meeting Thursday of House Republicans, leaders described GOP polls showing the public is strongly against a federal shutdown and would likely blame Republicans if one occurred, said lawmakers who attended the closed-door session. Some conservatives want the GOP-controlled Congress to approve a bill keeping the government open starting Oct. 1 only if it also blocks federal payments to Planned Parenthood.

“The message was there that this is a politically losing strategy that would put our own majority in peril,” Rep. Tom Cole, R-Okla., who is close to party leaders, said of the polling.

In addition, top Republicans have spread the word that even the National Right to Life Committee — which favors cutting off Planned Parenthood’s funds — doubts the wisdom of risking a shutdown over that issue. The group is the largest and perhaps most influential anti-abortion organization.

Senate Majority Leader Mitch McConnell, R-Ky., said of Right to Life on Wednesday, “It’s a strategy they don’t think makes much sense because it doesn’t succeed….”

Right to Life’s leaders released a statement this week endorsing a bill by Rep. Diane Black, R-Tenn., halting federal payments to Planned Parenthood for a year. The House plans to approve that bill on Friday, along with another by Rep. Trent Franks, R-Ariz., setting criminal penalties for medical providers who don’t try saving babies born live during abortions.

But the Right to Life statement was pointedly silent about the merits of enmeshing a cutoff of Planned Parenthood’s money with legislation keeping government functioning.

“We want people to think about what a government shutdown would do,” National Right to Life President Carol Tobias said in an interview Wednesday. She said of Obama, “As long as he’s in that Oval Office with a veto pen, it’s difficult to see how we could win that battle.”

Tobias said Right to Life is concerned that a shutdown over Planned Parenthood could harm the anti-abortion cause in the long run, adding, “If we want to save babies, if we want to defund Planned Parenthood, we have to put a pro-life president in the White House” in next year’s elections.

Wonder if Tobias is hearing today from members who got all riled up by Fiorina last night, or for that matter, by Bobby Jindal shrieking at the cowardly surrender-monkeys of the Senate who won’t throw away the filibuster in order to advance to a Clash of Civilizations with Obama over Planned Parenthood funding. It also wouldn’t shock me if more militant antichoice groups go all Hamas to the NRLC’s Fatah.

You even have to wonder if some antichoicers are rethinking the whole sting video strategy, which has mainly served to lather up the faithful rather than earn any converts. Some upcoming craziness could confirm that judgment.