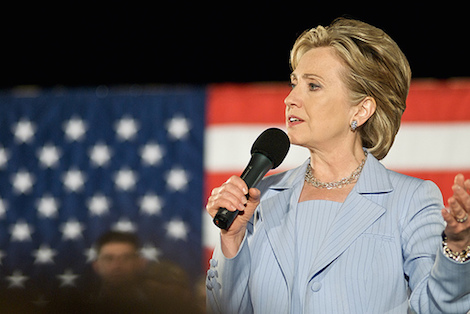 If you have pretty much had it with any discussion of the Republican presidential field for the week, check out Nate Silver’s excellent piece at FiveThirtyEight on the “feedback loop” that seems to be driving Hillary Clinton’s poll ratings inexorably down:

The Washington Post’s David Weigel recently observed that voters were hearing about only three types of Clinton stories, all of which have negative implications for her. First are stories about the scandal surrounding the private email server she used as secretary of state. Next are stories about her declining poll numbers. And third are stories about how Vice President Joe Biden might enter the Democratic presidential race.

Weigel isn’t exaggerating: For roughly the past two months, voters have heard almost nothing about Clinton apart from these three types of stories.

The second storyline–about HRC’s declining poll numbers–also includes a fourth, Bernie Sanders’ steady rise in early-state polls and the “enthusiasm gap” between his campaign and Clinton’s, but I guess there’s no need to over-complicate this.

And guess who was driving the negative coverage? A certain Gray Lady.

July 24 was the morning after The New York Times reported that “a criminal investigation” had been launched into whether Clinton had “mishandled sensitive government information” on her email account. That report turned out to be mostly erroneous; the Times later appended an editor’s note to the article, which is about as close as a newspaper will get to retracting a story. Still, the email story was back in the news after several months when there hadn’t been much reported about it….

Meanwhile, that was also about the time that speculation about a late Biden entry ramped up, particularly beginning with an Aug. 1 story by Maureen Dowd of The New York Times. A lot of the Biden stories have a Groundhog Day feel to them; they contain relatively little hard evidence about his intentions, and Biden continues to postpone his decision about whether to run. But Biden and his confidants may be deliberately keeping his name in the news to test Democrats’ appetite for a Biden bid. Whenever there’s a lull in the news cycle, Biden’s name seems to pop up again.

So how can Clinton break out of the negative feedback loop? Here’s what Nate thinks:

There are a number of ways the spiral of negative stories could end:

* Biden could opt out of the race and possibly also endorse Clinton.

* The trickle of new revelations on the email story could stop — as it largely did from April through June.

* Clinton could lift her poll numbers, perhaps temporarily, with an aggressive advertising spend.

* Clinton could hit some bedrock of support — her most loyal voters — beyond which her poll numbers wouldn’t decline much further.

* Clinton could fall far enough that the “Clinton comeback” story becomes more compelling to the media than the “Clinton in disarray” story, as happened late in the 2008 Democratic primary campaign.

HRC could also manufacture a change of media scenery by agreeing to more debates, though as I’ve discovered in the Twitter reaction to my post yesterday urging that approach yesterday, Team HRC has long memories of savage treatment by debate moderators in 2007.

In any event, Nate’s right: there’s nothing inevitable about the negative feedback loop HRC is in, despite the constant giggling assessment by Republicans that she’s doomed doomed doomed (belied by their anxious efforts to pour more hot coals on her head). It would be nice, though, if some of our MSM friends were not quite so anxious to lend them a hand.