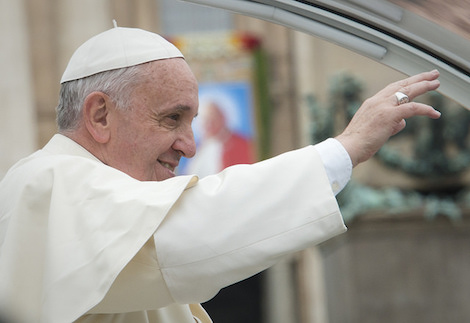 Like a lot of people who have been writing about religion and politics for a good while, I sort of dread Pope Francis’ visit to this country, which begins today. That’s partly because of the vast amount of ignorant interpretations we will see and hear from journalists and others who don’t know Catholicism from Thomas the Tank Engine. And it’s partly because a lot of people who do know what they are talking about will join the ignorant in spinning the Pope’s visit for their own purposes.

Sarah Posner and I wearily talked about this on the BloggingheadsTV show we taped this morning, and she was palpably relieved she would be semi-insulated by Yom Kippur obligations from the task of writing about the Pope’s visit as it happens. I have no such excuse. But I probably won”t be too breathless about it. Francis’ “message to America,” as it will undoubtedly be called repeatedly as though his whole papacy was mere prolegomena to this week, is going to be a series of variations on traditional Catholic doctrine. Conservatives will cheer when he talks about the “unborn” and liberals will cheer when he criticizes capitalism and its contributions to poverty and environmental damage. He’s probably not going to change that many American minds, and he probably knows that. He’s got a lot of other fish to fry.

Of all the commentaries I’ve read so far, Emma Green’s at The Atlantic seems best to grasp that American priorities are not necessarily the Pope’s.

It’s essentially meaningless to try and place him on the spectrum from “left” to “right” in the United States, contorting the poor pope to fit the mishmash of statism and individualism that plagues U.S. politics. But even more than that, America is not his primary audience. “Two-thirds of the Catholic Church is now in the developing world,” said Maryann Cusimano Love, a politics professor at the Catholic University of America. “That’s totally flip-flopped from two centuries ago, when two-thirds of the Catholic Church was in the global north.”

Francis’ views on economic life are about what you’d expect from a Latin American Jesuit leading a pre-capitalist church that’s never been comfortable with the role conservative Catholics in this country have been eager to grant to the Invisible Hand of Markets in securing justice for the poor. He’s not particularly more radical than his two immediate predecessors on these subjects–or for that matter, than Leo XIII over a century ago. It’s a matter of emphasis, and also of how he’s been heard.

As for his supposed “liberalism” on cultural issues, Green has, I suspect, the right take as well:

As with all things Francis, the buzzword to remember is pastoral—much of the change he has brought to the Church has been tonal, offering a different ways to reach the faithful. With the potential changes in the Church’s posture toward divorcÃ©es, for example, “it’s very much a pastoral instinct—it’s not an instinct that’s looking to rewrite Catholic doctrine on marriage,” Love said. Same with abortion: Earlier this month, Francis announced that priests should grant forgiveness to repentant women who have had abortions during the upcoming Year of Mercy. Many women “believe that they have no other option,” he wrote in a letter to priests. “I am well aware of the pressure that has led them to this decision. I know that it is an existential and moral ordeal.”

That’s only “liberalism” to people who assume traditionalist opposition to women’s rights doesn’t exist unless it’s blatantly, unforgivingly misogynistic in tone as well as substance.

Beyond all that, the Pope doesn’t go anywhere strictly in order to send messages, as National Catholic Reporter’s Michael Sean Winters explains:

Everyone is speculating about what Pope Francis will say when he speaks to a joint meeting of Congress, or at the United Nations. Progressives are hoping he will deliver his trademark trenchant criticism of capitalism and re-affirm his robust commitment to combating environmental degradation. Conservatives are hoping he will reiterate the Church’s opposition to abortion and same sex marriage. But, I have it on very good authority that in all three cities, Washington, New York and Philadelphia, the most important words the pope will say are well known to all of us. “This is my body … This is my blood.”

The pope is coming not to confound the commentators at Fox News although they will be confounded. There will be political ramifications to all that he has to say, to be sure. The Catholic blogosphere, and this blog is no exception, have focused on the points of controversy likely to emerge. It is easy to forget that Pope Francis is coming as a pastor and, in fact, none of us would pay any attention to what he had to say, and would likely not know much about him at all, if he was not the universal pastor of the Church. And, as such, he will lead us in worship and confirm us in the faith. That is the primary mission of the Petrine ministry, to confirm the people of God in the faith, and we can’t let all the talking points and arguments distract us from that fact.

You don’t have to be Catholic or have any truck with the “Petrine ministry” to grasp that the most important thing about the Pope’s visit to most American Catholics is that the Pope is visiting America. To them, as to Francis, what he specifically says in public settings is beside the point.