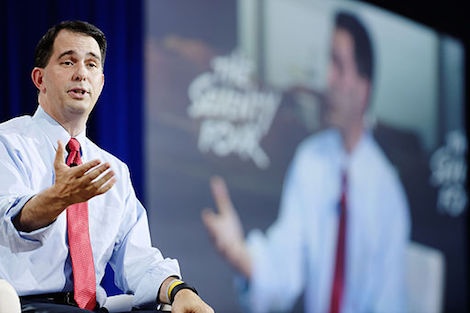 Here is what I’ve concluded from a number of hours of reading interpretations of Scott Walker’s withdrawal from the 2016 president contest: The timing of this event, at a juncture when nobody’s prior theories of the nomination contest are looking all that prescient, means that it can be perceived as the deus ex machina development that will finally begin to end the madness and bring things back to normal.

Thus, those who have been confidently predicting that the “winnowing” of the field will produce a consensus “Establishment” challenger to Donald Trump (or Ben Carson or Cary Fiorina or all three!) will say: aha! the winnowing is proceeding on schedule, with Walker joining Rick Perry on the sidelines. Trouble is, it’s not so certain that a candidate with somewhere between 1 percent and zero percent support nationally has much to add to the momentum behind Bush or Rubio or Kasich or whoever is supposed to start piling up those endorsements and roll on to victory. Similarly, the idea that Walker’s (and before that, Perry’s) withdrawal represents some sort of repudiation of the significance of Super-PACs is questionable, too. Walker was not entirely broke, and seems to have chosen to pack it in not because he had to, but because he could not summon the willpower to do what Rick Santorum did in 2012: live off the fat of the land in rural Iowa for a few months and then spring a surprise on Caucus Night. For one thing, Santorum himself is already there doing that, as is Mike Huckabee. It’s just more crowded at those Pizza Ranches in this particular cycle.

We probably won’t understand the significance of Walker’s sudden demise until well after the fact, just as it took a good long while to see the opportunity blown by Tim Pawlenty in 2012 when he staked everything on beating Michele Bachmann in the Iowa GOP Straw Poll and thus wasn’t around to batten on Mitt Romney’s vulnerabilities during the midwestern primaries.

But for what it’s worth, here’s my own theory: what made Walker exciting to a lot of conservatives earlier this year was that unlike Bush and Rubio he offered a plausible electability argument that depended on the party moving hard right and confronting its enemies with the full power of its base’s hatred rather than compromising or “reaching out” to this or that constituency of looters and loafers. This is something conservatives badly want to believe in. But as the Invisible Primary proceeded, other candidates emerged who offered competing and more viscerally appealing models for winning a general election without compromise: Ted Cruz, who argues that compromise itself is the enemy; Carly Fiorina, with her incessant, unrestrained attacks on Hillary Clinton; Ben Carson, who evokes a “common sense” Eden of real Americans who could easily solve their problems if purged of the liberal conspirators consciously working to destroy the country; and of course, Donald Trump, who manifestly defies all the old assumptions of how to win elections and offers a distilled essence of the base’s rage that makes Walker look squishy. In this kind of environment, in fact, Walker became exposed as a career politician (he has indeed been in public office since he was 24) whose heroic story of standing up to the unions grew smaller and smaller as other candidates made the contest about an apocalyptic challenge to all the godless liberals and all of those people, and also to the hated GOP Establishment that kept compromising with the former and sucking up to the latter.

It’s possible that had Walker managed to hang around he could have gained a second wind, just as Pawlenty might have four years earlier. But you can understand that by now he realized he was in a contest that bore little resemblance to what he had bargained for. You have to wonder how many of the survivors feel the same way.