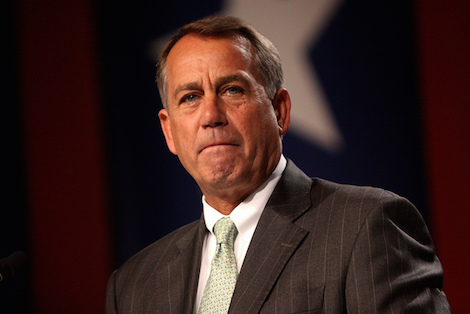 If you go over to the Rothenberg & Gonzales Political Report and click on their map of House districts, you can get an idea of the huge red swath of America that feels comfortable with the lunatic stylings of Donald Trump and Mike Huckabee and Ben Carson and Glenn Beck. These are folks, our fellow citizens, who don’t do so much as a double-take when a candidate for office accuses the president of being a secret Muslim or calls for creating alligator-filled moats surrounded by electrified fences at our southern border. Want to replicate Adolph Eichmann’s railway transportation efficiency for moving undesirable human beings?

After all, Eichmann famously declared in his defense “that he was guilty of arranging the transports, but he did not feel guilty for the consequences.” The “Deport them all” order doesn’t contemplate consequences for the human beings who are targeted.

In this environment, there isn’t much about the mood of the Banausinnen that is compatible with the leadership of John Boehner and Mitch McConnell, so it’s natural that the Republican congressional leadership should succumb sooner rather than later to some kind of vicious political challenge from within.

For the Speaker, this could be sooner than most people think. Technically, I think it is already the case that the Democrats have the power to save Boehner’s political life or let him be overcome by the braying dogs. And the right, knowing this, is seeking to frame it as a fatal condition.

If all 188 Democrats banded together and simply voted “present” on the motion to oust Boehner, the incumbent Speaker would easily win a majority of his 247-member GOP conference. He would just needs 124 votes, or more than half of the GOP lawmakers voting that particular day.

But striking such a deal with Democrats would further infuriate the right, making it even more difficult for Boehner to bring along conservatives on a host of fiscal issues he’ll have to confront this year, including raising the debt ceiling, a fight over budget caps and extending highway funding.

Conservatives say Boehner would be committing political suicide if he relies on Pelosi to save his hide.

Such a move would expose his weakness and ruin his credibility within the GOP conference, they say, putting him in an even worse standing with the far right than he is today.

“If the votes called to vacate the chair, then I see Boehner resigning,” the conservative lawmaker said of a possible floor vote to remove the Speaker. “He could go cut a deal with Pelosi, but would you really want to govern after that, knowing that Democrats saved your bacon?

“He’d be worse off — it’d be an embarrassment,” the source added. “That would be pretty pathetic to want [the speakership] that badly that you would take it under those circumstances.”

I guess we should talk about the office of the Speaker of the House, because it isn’t the same thing as the head of one particular party (that would be the Majority and Minority Leaders). Technically, the Speaker doesn’t even have to be an elected member of Congress. The only requirement is that an absolute majority of elected House members support the Speaker, and if they support Kim Kardashian, then she’s the Speaker. While it’s true that the House has never chose a non-member to lead them, the fact that they could highlights that it’s a position of majority leadership that isn’t necessarily the same thing as being the leader of the most populous party. It’s only because we really only have two parties that the Speaker is always from a party than enjoys an absolute majority rather than, say, a strong plurality. We don’t get consensus picks for Speaker, but the schism in the modern Republican Party has grown to a point that we really ought to have a consensus Speaker, if only so that we can pay our bills on time.

This is already how the House works in practice, as the Democrats have repeatedly had to provide the votes Boehner needs to keep the government operating. Having a challenge to his gavel that formalizes this arrangement wouldn’t be the worst thing in the world, and it wouldn’t be any cause for shame on Boehner’s part.

But it would be an earthshaking event because it would bring to light these distinctions and features of our system that are usually hidden. I imagine Europeans would be just as perplexed and fascinated by the spectacle as they were watching us examine hanging chads while cable news anchors painfully tried to explain the rules of the Electoral College.

It would certainly present a cause for us all to reevaluate how we understand the political situation in the country and in the Republican Party in particular. The majority in the House would not be a Republican majority anymore, which is why the Democrats could at least in theory demand some leadership posts and committee chairs in return for saving Boehner.

That wouldn’t happen in this go-round simply because the break with tradition would be too much and Boehner would resign rather than preside over such a coup against his own party. But it would be structurally how Congress should be organized, and that would eventually become the reality just because the logic of it is so strong.

In fact, if Boehner were to resign, the Democrats could at least open up negotiations with what remained of Boehner’s leadership team to see what price they are willing to pay to remain in control. If they chose to vote for their own political funerals by supporting a far-right Speaker, then they too would be lacking in political imagination as well as basic survival skills.

Don’t count on ambitious (moderate Republican) politicians failing to adapt to the new political reality for long, though, because those bills gotta get paid.